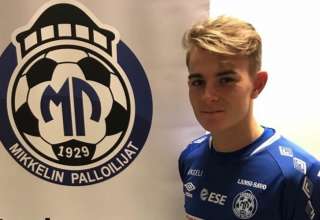 Simmons, during his loan spell at Mikkelin (Finland)

There’s something that no one will ever be able to take away from the players who are in uniform for their respective teams’ first-ever Canadian Premier League games: Those players will always be able to say they were CanPL day-one’rs. They’ll always have that historical link to the league and Canadian soccer.

And that was a major attraction for holding midfielder Elliot Simmons, whose deal with Halifax Wanderers was revealed Tuesday. The England-born, Stittsville, Ont. raised player had been with Swedish side Dalkurd FF, he had some offers in Europe, but decided to make the move back to Canada.

“For me, it’s new. It’s going to be high-profile and history will be made this year,” said Simmons of the CanPL, which kicks off this April. “It will be great to be involved in something that’s never been seen before.”

Dalkurd is a team in transition; according to the club’s own news release, in September a spat between the club’s major sponsor and ownership led to minority shareholder Kawa Junad packing up his things.

From the club’s own English-language press release: “Dalkurd FF also wants to apologize to its fans worldwide because of the lack of detailed information through our official channels. But due to the circumstances we haven’t been able to give this information until now. Previously there have been speculation and information from unofficial sources, which haven’t given an accurate view of the situation.”

As for what he’ll bring to Halifax, Simmons said Wanderers supporters can expect a player who will bring out the best in his teammates.

“I am a very team-based player, and that comes with my role in defensive midfield. I want to play with good flow, good possession, good tempo, and be that link between defence and attack.”

Simmons is a product of the Ottawa Fury’s youth system. And, while he didn’t play with Zachary Sukunda, the Wanderers first-ever signing, he thinks that having another former Fury prospect as a teammate will be a great icebreaker for him in Halifax, a city which he’s never previously visited.

“Zachary was two or three age groups ahead of me,” said Simmons. “But I am sure we have quite a few mutual friends.”