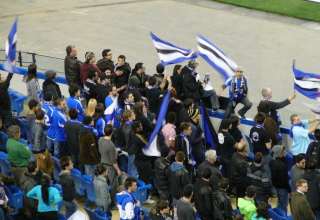 The Montreal Impact held its pre-season open house on Thursday evening in front of about 2,000 of its most devoted fans at a poster-festooned Olympic Stadium, many drawn by the news that 1,000 tickets for Saturday’s opener were to be given away to the first folks turning up.

The event got underway with the introduction of the playing personnel in ascending numerical order, with captain, Davy Arnaud, being presented to the fans last.

The only players missing from the soiree were prospective US Olympian, Zarek Valentin, and Canadian, Evan James, who missed the season opener due to injury and is also on the preliminary Canadian men’s U-23 roster. Filling the ranks in their places were Montreal-area natives Karl Ouimette and Wandrille Lefevre, both members of the Impact Academy side.

All received a good hand, with local boy Patrice Bernier and veteran Eddy Sebrango getting the loudest acclaim from the assembled spectators, which also included a 50-strong delegation from the Ultras. They filled the time that the team spent loosening up before practice beating out rhythms and chanting selections from their repertoire, a bullhorn amplifying their vocal expression and exhorting the others in attendance to join in.

Once the workout got underway the chanting continued, the Ultras —always independent of thought and not at all shy about expressing their wishes, wants and desires — at one point chanted the name of Ali Gerba, still on the Impact payroll but persona non grata in the team entourage.

While the bulk of the team scrimmaged on the bulk of the field with Donovan Ricketts manning the only occupied net, the Impact’s other keepers, Evan Bush, wearing number 30 this season since Davy Arnaud has taken the 22 he wore in 2011, and Greg Sutton worked out in the other under the watchful eyes of keeper coach Preston Burpo and assistant coach Mauro Biello for 10 minutes before joining the hour-long workout with the rest of their peers.

The practice finished, the players went to the crowd, signing autographs, shaking hands and tossing footballs into the stands. Once they had finished communing with the soon-to-be paying customers, a number of them met the media.

Jeb Brovsky was asked about his first interactions with local fans.

“It was great. It was an amazing turnout.” He declared. “I don’t think any of us expected that many. When we were coming in with our cars and we saw the line waiting to get in, it was a special feeling. Montreal fans are some of the best so we’re excited for Saturday.”

Brossard, Que. native Patrice Bernier was not as surprised as his teammate to see the size of the crowd that turned up for the practice.

“With the media coverage we’ve had I’m not at all surprised that so many would turn out for this event,” he said before turning to the matter of whether the team is ready for their home opener, a day and a half away.

“We have to be ready, we have no choice. It’s our second game, our first at home and there are going to be perhaps almost 60,000 fans cheering us on. That will certainly be a motivating factor.”

Asked about the game itself and the team’s plans for taking on the visiting Chicago Fire, the Montreal midfielder indicated that rather than playing the direct style of game the team attempted in Vancouver, “If we’re more intelligent with the ball and show some patience, it should be to our advantage.”

The Impact takes to the pitch on Saturday, playing its first MLS home opener in front of what could be the largest crowd to ever watch a professional soccer game in Montreal. Sales have topped the 53,000 mark and an extra 3,600 seats have been constructed and placed on the four corners of the Big Owe field, increasing the potential capacity to over 60,000 places.