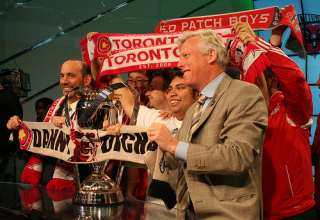 When MLS President Mark Abbott addressed the media at halftime of last Saturday’s MLS season opener between the Whitecaps and Impact at BC Place, he stated that the league was still focused on New York City as its next expansion market.

He said no deadline had been set to abandon a push to get a second team into the Big Apple. It’s clear MLS wants to have a second team in NYC, even though team No. 1 doesn’t play to regular sellout crowds in its spanking new stadium near Newark. There are other expansion bds. Orlando City of the USL has been vocal about its wish to be MLS team No. 20. And there are rumblings that if the Twin Cities — home of the current NASL champion — gets a new NFL stadium, that an MLS bid would be launched.

But, as you look at TV numbers and attendance figures — as an economist, not as a sports fan — you’d find it harder and harder to distinguish between the MLS business model and the NHL’s business model.

Both leagues see television numbers that are much stronger in Canada than the United States. Last week’s MLS debut on the NBC Sports Network — a game which included the major-market New York Red Bulls — drew a little more than 80,000 viewers across the United States. And that’s actually good news: the old Saturday MLS broadcasts on Fox Soccer Channel usually drew less than 70,000.

Meanwhile, the Vancouver-Montreal MLS opener drew three times the viewership of the NBC broadcast. That is, the RDS French language broadcast drew three times the NBC audience. Put the RDS numbers together with TSN, and you have more than 500,000 Canadians who were riveted to the game from B.C. Place.

While there are great American markets where sellouts are the norm — Portland, Philadelphia and Seattle — there are many other markers where soccer is still very much a fringe sport. Just like the NHL. Weak in many American markets, strong in a few areas.

Meanwhile, B.C. Place drew 21,000 for the opener. Toronto just gathered more than 48,000 fans for its Champions League home match against the Los Angeles Galaxy. And, this weekend, the Impact are looking to draw in the neighbourhood of 60,000 for its home opener against the Chicago Fire. The Canadian markets are all strong. Just like the NHL.

Just like the NHL, MLS tends to attract suburban fan bases who make a little more than average. That’s why Volkswagen is a better sponsorship fit than, say, Toyota.

OK, we’ve looked at how similar the hockey demographic is to the domestic soccer demographic (I use “domestic soccer” because there are Eurosnobs who won’t watch MLS. There are no Eurosnobs amongst hockey fans). But how does the NHL differ from MLS?

Well, the NHL is saturated throughout its strongest market. It has teams in seven Canadian cities, because it knows the revenue and interest it generates north of the border is greater than what can be earned in a country 10 times — population-wise — the size. MLS isn’t talking up more expansion to Canada. If I was Don Garber, I’d be beating every bush to see if there were ways to take advantage of this MLS surge in Canada, and to spread it to other key markets. I’d be scrambling like heck to figure out how to get MLS into Alberta, where people have more disposable income, per capita, than anywhere else in North America. Albertans, on average (according to Conference Board of Canada stats) make $20,000 more per year than the average Torontonian, and pay far lower taxes. And it’s the fastest growing population base in Canada.

(That being said, it needs to be stated that FC Edmonton owner Tom Fath has repeatedly stated he does not wish to make the move to MLS. It’s important no one makes a leap of logic and links my argument about how Alberta’s demographic can’t be ignored to an expansion bid from FC Edmonton which doesn’t exist).

Ottawa already had a failed bid for an MLS side. MLS shouldn’t forget about the capital. A Toronto-Ottawa-Montreal triangle could be a new Cascadia.

When we compare Canada and the U.S. (per capita), it’s easy to see that the average Canadian will spend more money and pay more attention to MLS than the average American. It’s a crazy shift. In 2006, MLS was still an all-U.S. league. Within half a decade, it skews heavily to Canada.

Canada has the magic elixir (save for Vancouver, but Vancouver has a team) that should make every sports business operator salivate — disposable income. Our economy didn’t take the beating that the Americans suffered. Our dollar is at par, which is crap for exports but fantastic for Canadian sports franchise operators, because it reduces labour costs (players) and how much it costs to play road game in the U.S.

So, while there are many who scoff at the notion that there will ever be even a fourth Canadian franchise, I would argue that, unless MLS can radically change its footprint, it will need more of Canada to push itself towards long-term viability. Canadians watch soccer on TV. Canadians attend games.

New York is nice, Orlando’s bid is noble. But, I would argue that nothing has made as dramatic effect on MLS — as a business — as the decision to open up the border with Canada.