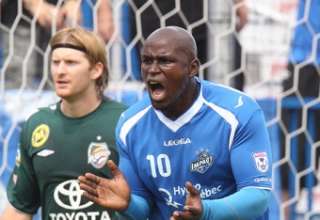 There were two streaks on the line when today’s match got underway at Saputo Stadium The visiting Puerto Rico Islanders were undefeated in their past eight games, a string that stretched back to the 19th of June, while the Impact had gone even longer without picking a victory, its nine-match winless skein extending back in time to the 4th of last month.

Montreal coach Nick De Santis, who stated yesterday that the Impact had to find a way to play loose without going down a goal beforehand, saw his wish come true as his men dominated the on their way to victory with their first scoring opportunity coming on an Ian Westlake shot in the 10th minute that Islanders keeper Richard Martin, making his NASL debut, deflected to the left of his net.

The rest of the opening half belonged to Ali Gerba. Playing in his first game back in some time, only his 10th of the season, he took four shots in the first 45. He had a second opportunity in the 19th minute when an Amir Lowery pass sprung him loose only to have Martin stymie him again. In the 30th minute, Gerba, rumoured in some quarters to be on his way out of town in the near future, took centre stage once again with an attempt that almost found the top right hand corner of the Puerto Rico net.

Gerba brought the crowd of over 12 000 to life once again with a pair of shots in extra time but both were turned aside by the game’s hardest working man, Islanders keeper Martin.

Ryan Pore and then Cameron Knowles, both playing their first game in Impact colours, had their kicks at the can but were turned aside by the busy Orange Troop goalkeeper, who made six saves in the opening half as Montreal directed eight shots his way.

Puerto Rico challenged only once. Kevon Villaroel was turned aside in the 35th minute by Impact keeper Evan Bush, who has now played more minutes in the Montreal net this season than has Bill Gaudette, the man he replaced.

The rough-and tumble -opening 45 featured 16 fouls and saw three yellow cards awarded by referee Carole Anne Chenard. Montreal’s Lowery and Hassoun Camara both received their fifth bookings of the season and will not dress for the Impact’s match against Minnesota on Saturday.

Knowles spoke about the team’s achievement before moving on to mention his return to action two weeks short of two years after breaking his leg here in Montreal.

“We got three points, that’s all that matters,” he began. “And I survived 90 minutes so that’s two boxes checked.”

Asked what the key to the win was, he replied,” Solidarity and intensity. Everybody was on the same page and everyone was working hard. We created a lot of chances and we knew it was going to come.”

The New Zealand defender also had something to say about today’s scoring star.

“You’d think he was 28, not 38. He’s a legend. He gets himself in good spots. After playing against him for so many years I’m so grateful to have him on my team. You fall asleep f0r a half second and he punishes you.”

Coach De Santis had nothing but positive comments about the newcomers in his post-game remarks, characterizing the result as a reward for his players.

“The message we keep putting out is centred on effort, solidarity, initiative and responsibility,” he declared. When you put out a message like that there has to be a reward and today they got it, even if they had to suffer.”

“We played within our means,” he continued. “They didn’t cause us that many problems. Depth and the will to fight made the difference. We have quality players and the confidence was there the whole game. Ali, even though he missed, got himself in good areas. We penetrated their team maybe seven to nine times. Pore showed some good things. I think the three guys in the middle, Amir, Westlake and Hassoun did a very good job. They dictated the pace of the game and Westlake was very present, as was Amir.”

Asked what the new men contributed he answered, “They brought a new dynamic and energy to the team. You look at Ryan Pore, he has quality. He’s very smooth, he’s an intelligent player. I think Cameron Knowles did a very good job. Just his presence and his communication, you see he’s a leader in the back, I think that brought a lot of stability to the team.”

Montreal maintained its momentum as the second half got underway, controlling play and holding on to the ball while making sure that Martin earned every penny of his pay packet, stopping a point-blank Ryan Pore shot in the 61st minute.

Islanders forward Yaikel Perez was red-carded in the 65th minute, leaving his team short-handed for the balance of the game. Taking advantage of the numerical superiority the Impact had one of the best chances of the game several minutes later when Mignane Diouf set up Gerba, who then relayed the ball to onrushing Eddy Sebrango, whose just missed on sliding attempt to convert.

Sebrango made up for the miscue in the 74th minute. Taking a pass from Phillipe Billy, last year’s Impact Player of the Year, off his chest, the wily veteran striker moved into first place on the team’s scoring parade, driving home his third of the season in the sixth game of his comeback.

Two minutes later he headed a Gerba pass over the Puerto Rico net, narrowly missing his second of the afternoon.

“I got in between the two defenders and it was a good cross,” he said. “Camara tried to jump for it but he never got it. I got a chance to put it down off my chest. It was a weird goal but I’ll take it.”

THROW-INS: The second-place Islanders are the only NASL team still undefeated at home, posting a 6-0-3 record at Juan Ramón Loubriel Stadium.

• Alexandre Bilodeau, men’s moguls gold medallist at the Vancouver Olympics signed autographs for fans before the game this afternoon.

• According to Radio-Canada the Impact have initiated discussions with goalkeeper Bill Gaudette with the intention of signing the 29-year-old American as the team’s starting keeper for 2012.
The Impact will unveil the team’s new MLS logo next Saturday during the game against Minnesota.