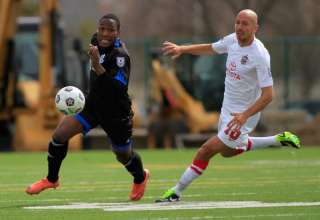 Coach Colin Miller got his first NASL win. And he gave a nod to Lady Luck.

Through the first three games of the regular season and Wednesday’s 3-2 loss to the Vancouver Whitecaps in the first leg of the Amway Canadian Championship semifinal, Miller has lamented the posts hit by his team and the calls that have gone against them.

In Sunday’s 1-0 home-opener win over the San Antonio Scorpions in front of a crowd of just 1,026 at Clarke Stadium, the Eddies finally saw fortune go their way. The Eddies now have four points from four matches (1-2-1).

The Scorpions had several clear-cut scoring chances in the second half, but couldn’t convert any of them — allowing Shaun Saiko’s late first-half penalty-kick marker to stand as the deciding goal.

“I told the guys before the game that I’d settle for a poorer performance and a win,” Miller said after the game. “And they did that.

“We sure find ways to make it difficult for ourselves; at times it looked like we were trying to commit suicide… But Lady Luck gave us a couple of breaks.”

Mallan Roberts got his first NASL start; the 20-year-old centre back kept his place after featuring against the Whitecaps Wednesday. Miller started the game with 10 of the same starters as the ACC semifinal first leg. The only change? Carlyle Mitchell came back into the squad to partner Roberts in the centre of the defence.

The first half saw Edmonton dominate the game physically — and allow very little in terms of chances. Most impressive was the work of fullbacks Lance Laing and Edson Edward. Laing made several dangerous forays into the San Antonio end, and took a bending free kick that forced a decent save from Scorpions keeper Pat Hannigan.

San Antonio was forced to adjust its backline just 10 minutes in, after Greg Janicki left the game with a non-contact injury. Kevin Harmse, the team’s Canadian holding midfielder, went to the back line — and would play a major role in the goal.

With less than a minute left in the first half, Edward intercepted a low pass off a Scorpions set piece and dashed up the wing. He got all the way to the San Antonio penalty area, where he and Harmse got tangled and both went to the turf. Referee Justin Tanev pointed to the spot. With the ball bobbling in between Edward’s feet, Harmse might have been better served had he backed off and cut off the angle on the run. But, by getting his body on Edward, he put himself at risk of the foul.

Saiko coolly sidefooted the finish into the right side of the goal.

Scorpions coach Tim Hankinson said at halftime that he was unhappy with how his team dealt with FCE’s physical approach in midfield, which was to take away space and contest the ball wherever the Eddies could.

“We came here for a football war,” he said. “We’ve got to be more aggressive.”

But, in the second half, Hankinson could only wonder about the chances the Scorpions threw away. A giveway by Roberts allowed San Antonio to break with numbers into the FCE penalty area. Keeper Lance Parker came flying off his line to challenge and block a shot by Esteban Bayona; the rebound came to Hans Denissen, but the Scorpions midfielder could only lob a timid attempt at goal that was blocked by Laing, who was the only obstacle between Denissen and an open goal.

Bayona would later get behind the Eddies’ defence but then screwed a shot badly high and wide.

Bayona would finish a hat trick of bad misses after he pounced on a poor touch by Edward in the FCE area. But Parker came out and got a piece of the shot.

San Antonio did get a ball into the goal, with defender Luka Vucko getting a head to a free kick late into the game. But Vucko was ruled offside.

It was a series of getaways for the Eddies in the second half, but Saiko wouldn’t apologize for it.