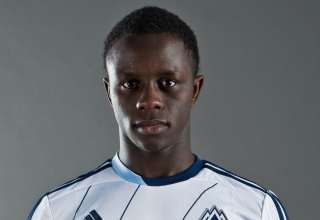 A goal and an assist from Kekuta Manneh ensured the Vancouver Whitecaps a come-from-behind result at BC Place Saturday night, as they erased a two-goal deficit within the span of three minutes to draw FC Dallas 2-2 in front of 19,967.

The 18-year-old substitute started the comeback in the 72nd minute, thrashing a ball which ricocheted to him off Tom Heinemann past Raul Fernandez in the FC Dallas goal. The Gambian’s effort came moments after a fine save from Fernandez off Camilo, and marked his first-ever Major League Soccer goal.

“It always feels good to score, especially with my first professional goal,” Manneh told reporters after the match. “It was a tough situation. We were down two goals and we needed a goal.”

Manneh followed up that goal by running past a couple of Dallas defenders three minutes later before passing a ball across the six yard box which Camilo pounced on, taking a quick shot which touched off Jair Benitez before going into the goal.

“It’s always something to build on when you score a goal,” Manneh said of the confidence the goal gave him to drive forward and press for the equalizer. “I like to take on people, create chances, and score goals. It was an exciting game.”

An exciting game indeed, and what set up Manneh for his heroic performance on the night was a pair of earlier goals conceded in strange circumstances.

Dallas took its first goal just nine minutes in, as Andy O’Brien ended up scoring in his own net. On the play, Kenny Cooper hit a glancing header which bounced off O’Brien before bouncing into the Vancouver goal.

Some dawdling on the ball from goalkeeper Joe Cannon caused an initial corner which quickly led to a second from which Dallas scored.

“I think the goal’s come off the back of my head,” O’Brien said. “A lot of the goals we’ve conceded have been unlucky, scrappy, we could have done something about them, whether it be not conceding the corner or the free kick.

“I’ve said before, ever goal that goes in, we analyze it and try and correct it. But I think a few of them, I think today, were unlucky.”

Following O’Brien’s own goal, his central defensive partner, Brad Rusin, was also involved in a bit of a blunder, as he went up for a header just after half-time only to send the ball right into the path of Matt Hedges, who scored to make it 2-0 in the 47th minute.

“When I’m going up for the ball I just try to get anything on it,” Rusin said. “Unfortunate it went back, and went up in the air. I’m not really sure what happened. Somebody had to make a decision, and they reacted better than us.”

After Camilo’s equalizer, in the 78th minute, midfielder Jackson ended up getting ejected for elbowing Whitecaps fullback Alain Rochat in the face. That led to an onslaught of Vancouver pressure as the home side smelled blood.

In the 82nd minute Manneh was once again involved, as Fernandez struggled to deal with a stinging effort, dropping the ball right into the path of Darren Mattocks. The Jamaican had a tough night of it with several missed opportunities from close positions, and at this vital moment once again couldn’t hit the target from close range.

Then, in stoppage time, the ball dropped to Camilo who pushed away from his marker only to fire a jumping half volley straight at Fernandez.

Dallas, reduced to 10 men, still had a great chance to win in stoppage time, as Blas Perez hit a powerful left-footed strike low to Cannon’s right, but the goalkeeper reacted sharply to preserve the draw.

The Whitecaps, now 2-3-3, play again on Wednesday in Canadian Championship action at BC Place. Then they’ll take on FC Edmonton as they look to close out their semifinal tie which they currently lead 3-2 on aggregate.