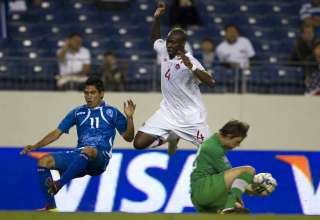 With a date against the heavily favoured Americans on Saturday, the Canadian men’s under-23 team was hoping a good start in its first game at LP Field in Nashville against El Salvador would get it off on the right foot.

That wasn’t to be as the El Salvador side put in a solid performance in picking up a 0-0 draw with the Canadians.

“In tournaments like this it’s important for a team to start well,” said Canadian head coach Tony Fonseca. “I think the way they faced this game was a certain level of stress coming into the first game. I think they faced it with being a little bit nervous for our taste.”

Canada held good possession in the early minutes but El Salvador had two quality chances in the opening 20 minutes that tested FC Edmonton’s Michal Misiewicz in the Canadian goal.

First, 11 minutes in, Jaime Alas led an attack on the left side and fed a low cross to Isidro Gutierrez who was in space on the right-hand side. Misiewicz closed down the angle well to stop the initial shot with his right hand before Gutierrez fired the rebound wide on the follow up.

Just nine minutes later, Andres Flores was played in on goal but again Misiewicz was sharp to close the angle and stop the shot.

On the other end, Canada didn’t do much to trouble Yimy Cuellar in the El Salvador goal. On 30 minutes, Carl Haworth put through a nice pass to an onrushing Shaun Saiko on the right hand side of the 18-yard box, but his shot missed high.

“I think we have to look at the positives. We kept a clean sheet today,” said forward Marcus Haber. “It wasn’t our best game going forward with the ball but we created a few chances and I think nil-nil is a fair score.”

With three games in five days, teams have to be wary of leaving too much on the field in the first game. Fonseca feels that while his side didn’t pick up the win, El Salvador, the team likely to rival Canada for second in Group A in the competition, pushed harder than perhaps was wise.

“I think they overspent energy and obviously they can be paying a high price for that,” warned Fonseca. “That’s my feeling. I don’t know them well I just feel they ran more than they should. This is a tournament. It’s three games in five days.”

After halftime, El Salvador certainly came out with more energy and, but for some suspect finishing, could have found themselves in front.

In the 60th minutes, Alas crossed from the left hand side after beating Matt Stinson. It fell to Gutierrez again but his shot was deflected out for a corner, though it didn’t look as though it was going in.

Canada will have to regroup quickly as they’ll be coming up against the Americans, who are not only a favourite in this tournament, but could challenge for a medal in London as well.