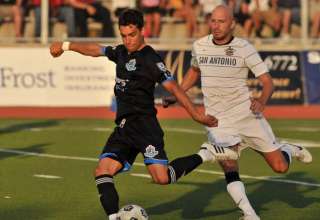 In a game that saw FC Edmonton take a defensive posture on the road against NASL-topping San Antonio, the Eddies yielded a second-half goal to Esteban Bayona, and dropped a 1-0 decision to the Scorpions.

Bayona found himself wide open in the box to nod home a cross from Jonathan Greenfield in the 66th minute.

For the fourth straight NASL match, the Eddies failed to find the back of the net.

The field at Heroes Stadium is the smallest in NASL — and it is a turf surface. So, FC Edmonton pulled out a scheme that fans would remember from home games at Foote Field last season. Like Sunday’s draw with Puerto Rico, the Eddies played a 4-4-2, but were dropping the midfielders back to take away the final third of the field from the Scorpions attackers.

It was a very conservative system, which led to a slow, methodical game. But, with the Eddies playing in 36 C heat — and in the midst of a stretch of three games in six days — brains took precedence over beauty. A tactical chess match was more pragmatic for the Eddies than an up-and-down-the-field game.

“The weather, it is what it is,” said defender Paul Hamilton after the match. “Both teams have to play in it, though they may be more used to it than we are. You just have to stay hydrated, but you can’t let it affect you.”

French forward Serisay Barthelemy replaced Yashir Pinto in the attack, and paired with Michael Cox up top. Shaun Saiko was once again in the free role. Midfielder Ilja Van Leerdam and defender Kevin Hatchi were both unvailable due to suspension, so Dominic Oppong came into the midfield for Van Leerdam — more proof of Matt Lam’s slide down the FCE depth chart. And Fabien Vorbe was called in to replace Hatchi at left back.

The first half was slow and methodical in the punishing heat — and the Eddies would be satisfied going to the break at 0-0 with the Scorpions. There were really on two chances of note in the entire half — one for each team.

Just minutes into the match, Scorpions forward Pablo Campos slid a ball through for strike partner Hans Denissen, who smashed a rising shot off the outside of keeper Lance Parker’s post.

Then, with five minutes left in the half, Saiko unleashed one of his patented long-distance drive, a 25-yard strike that forced Scorpions’ keeper Daryl Sattler to the turf to make the stop.

After the halftime break, the Scorpions increased the pressure, and hit the woodwork twice. Off a low, skipping corner kick, Blake Wagner was able to get in unmarked and smash a header at goal, but FCE keeper Parker was able to get his hands to the ball and push it onto the bar. Then, seconds later, Walter Ramirez smashed a long shot that Parker leapt and got his fingertips to, and deflected the ball off the bar.

Denissen smacked a 25-yard free kick in the 60th minute which Parker was able to collect off the short hop, but then Bayona struck paydirt.

The Eddies brought on Lam and Kyle Porter to bolster the attack, but Sattler didn’t really have anything to do. In fact, Parker was called on to make another excellent save, palming a vicious shot from Campos just wide.

“What we tried to do was defend well and if you look back, we played the first place team and they only got three or four chances,” said FCE coach Harry Sinkgraven in his postgame interview. “Overall, I’m pleased with the team’s performance.”

“We knew that they usually try to sit back and hit you on the counter,” said Hamilton. “So our plan was to stay tight and defend, and not to give them any kind of space. But they really came out attacking in the second half, we were on our heels a bit, and they created some good scoring chances.”

The only good news? The Fort Lauderdale Strikers lost to Tampa Bay earlier Wednesday, meaning the 3-8-3 Eddies still remain seven points out of the NASL’s final playoff spot. But, if the offensive woes don’t come to an end soon, seven points back may as well be 70.