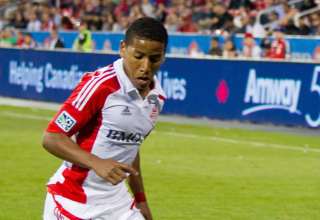 The Reds were not able to pull out a win but still managed a positive result on the road to earn deserved 1-1 draw against FC Dallas in hot and humid conditions in Frisco, Tex. With the temperature hovering at 35 C at kickoff, both sides started with great pace but the game slowed down dramatically by the final whistle was blown.

With the draw, Toronto (2-10-4) is now unbeaten in five matches while Dallas (3-9-6) continued its struggles and is now winless in 12 games.

The Reds returned to the scene of its 3-0 triumph over the Hoops in what was a must-win finale of the CONCACAF Champions League group stage last fall. In that match, forward Joao Plata played his best game in a TFC uniform by setting up Koevermans for the first goal before burying two second-half strikes to book a spot in the CCL quarter-finals.

That effort impressed Toronto management to the point where the five-foot-two Ecuadorean was rewarded with a permanent move to the Reds. My, how times have changed. Now Plata is nowhere to be found on Toronto’s roster as he has left the team after a dispute about the lack of playing time.

On Wednesday morning, Director of Player Operations Earl Cochrane addressed rumours surrounding Plata and said that the loan deal with his former club LDU Quito is still being finalized.

“As of today Joao Plata is still a Toronto FC player,” Cochrane said over a conference call from Toronto with the media. “(Plata) was absent from training yesterday, he was on the travel squad for Dallas and Philadelphia.

Cochrane expressed disappointment that Plata is no longer with the team despite the loan not being complete and that the team is in discussions with the league to find out if any disciplinary actions can be taken over Plata’s misconduct.

Hoops Strike First
Toronto once again gave up an early goal in similar fashion to its 1-1 draw at home against the New York Red Bulls on Saturday. Dallas got on the score sheet in just the fifth minute when Andrew Jacobson headed a cross towards teammate Zach Loyd into the centre of the box. The defender sent a header of his own to the bottom right corner past TFC keeper Milos Kocic to give the Hoops the early lead.

In the 18th minute, Dallas striker Brek Shea made a run on the right flank but his right-footed shot missed the far post. TFC defender Logan Emory, who was coming off a an inspired effort against the Red Bulls, played Shea well and forced him to the outside and to take a shot with his off-foot.

Dallas came close again in the 22nd minute when Hernan Pertuz beat three Toronto defenders on a corner and came away with a header on target. The ball bounced up high, but Kocic just managed to get his hand on it.

Minutes later, Toronto finally got a shot on goal when forward Ryan Johnson cut into the middle to drive a shot on goal but Kevin Hartman made the save look easy as the ball came right at him. The 38 year-old keeper made some history in the match as he became the first player in MLS to make his 400th regular season appearance of his career.

But in the 30th minute, the red-hot Danny Koevermans continued his scoring streak and pulled Toronto level. Former Hoops midfielder Eric Avila, who was playing in Frisco for the first time since joining TFC, played a nice cross into the Dutch striker who calmly raised his leg to get a little touch to change the direction of the ball and put it past Hartman.

Meanwhile, Mariner continued his touchline theatrics with an emphatic leap in the air accompanied with a thrusting fist pump to celebrate the tying goal.

The Reds backline did look shaky at times in the first half, particularly Jeremy Hall who had fits dealing with speedy striker Fabian Castillo. Hall made the mistake of letting the ball come to the Colombian instead of playing tight and putting pressure on the forward. The 20 year-old Castillo showed a flash of brilliance and his technical skills early in the first half, dribbling around and over three TFC players.

Castillo nearly took advantage and put his team back in front in the 33rd minute but was thwarted by Kocic who made a terrific save. Wide open on the left side, Castillo controlled a long lob pass before cutting in and driving a hard shot at goal. Kocic got his hands to the ball but the force of the shot was too much to handle and it continued past the TFC keeper to rattle off the crossbar.

In the 37th minute Richard Eckersley made a bad tackle on Shea — colliding with the striker and knocking him to the ground. The referee ruled that the foul was at the edge of the box despite both players falling well inside penalty area. Luckily for the Reds the opportunity was all for naught as FCD captain Daniel Hernandez sent the ball harmlessly over goal.

The pace slowed down considerably in the second half with only two shots on target both by TFC. In the 49th minute Avila nearly scored on his former team when he took a one-touch pass from Koevermans but his shot was deflected and stopped by Hartman.

The other attempt at goal came in the 84th minute off a Torsten Frings corner kick. Koevermans made a run across the face of the goal and sent a header at goal forcing the Hartman to make a tough reactionary save.

After having so much success against Hall in the first half, for some reason Castillo was moved the right side in the second half but he did not have much success under the watchful eyes of Ashtone Morgan. The TFC backline did well to block dangerous attempts by Castillo and Shea to smother the Dallas attack. The Hoops were not able to register a shot on target in the second half.

Dallas midfielder David Ferreira makes his long-awaited return to action for missing almost 15 months after breaking his ankle in April last year in a match against the Vancouver Whitecaps. The 2010 MLS MVP in 2010 played well after coming on in the 57th minute.

Mariner will have an injury concern heading into Saturday’s match with Terry Dunfield coming off in the 81st minute after suffering a head injury minutes earlier. As he walked off the pitch the midfielder looked very groggy and his eyes were half closed.