June 20, 2021
9 New Articles
Home Canadian Soccer The Association Centre of the Universe, centre of the bid? 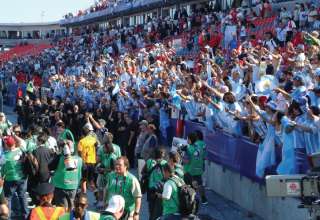 Because it’s hosting the 2015 Pan Am Games, the City of Toronto chose not to be a host city for the Women’s World Cup. Toronto’s decision to shun soccer’s showpiece event for women was a controversial one. But there are those who feel that the Pan Am Games might give Canada’s largest city a step up if and when it comes time for this nation to host the most popular sporting event on the planet…

In early April, Toronto’s city council passed a motion to explore the feasibility of co-hosting “major events.” But, since the 2026 World Cup was the only example cited in the motion, it’s safe to say that Motion MM 30.50 is firmly aimed towards discovering what it will take for the city to welcome soccer’s greatest spectacle.

Toronto is no stranger to major events of any kind, particularly when it comes to sports. Between the regular schedules of its many professional teams to annual events like tennis tournaments and IndyCar races, there’s a notable sporting event happening in Toronto on virtually every day of the year.

The only thing that Toronto lacks in order to host World Cup matches is, well, somewhere to actually play the games. More specifically, it lacks a stadium to play the most important games — and a reason for said stadium to exist after July 2026.

“One of the key lessons for any host jurisdiction pursuing these big events is that you need to be clear in what your objectives are before you get too involved,” said Tobias Novogrodsky, Toronto’s director of strategic planning and implementation for the 2015 Pan American Games. “You have to sure that the long-term use is there and you’re building something you need for the event, yes, but also for the community to use afterwards.”

Since the World Cup is both a soccer tournament and an international spectacle, Toronto has to prove itself capable of handling both types of events. The football side was handled in 2007 when the National Soccer Stadium hosted 12 matches (including the final) of the 2007 FIFA U-20 World Cup. The Pan Am Games represents that next step, as thousands of athletes and spectators will arrive in the city over a 17-day period next summer.

In terms of logistics, the needs of the Pan Am Games dwarfs what is needed for a World Cup, yet Novogrodsky said that the venues built for 2015 are designed with an eye to long-term use, so Toronto won’t be left with any so-called white elephants that are impractical for anything other than a world-class sporting event.

Of course, World Cup-calibre stadiums, almost by definition, never fit that bill given that even the smallest eligible venues seat at least 40,000 fans. A renovated National Soccer Stadium or renovated Rogers Centre could handle group stage matches or a game in the round of 16, yet neither stadium comes close to meeting FIFA’s expectations for hosting a semifinal or final match.

Since it’s hard to believe Toronto would be satisfied in merely hosting early-round games, that creates the need for a new mega-stadium capable of seating at least 75,000 fans and hosting a World Cup final. Such a venue could be built, however, and with the added bonus that this mega-stadium could have more use to the city than simply for the month-long duration of a World Cup.

Both Maple Leaf Sports and Entertainment and broadcasting giant, Rogers, have been linked to bids for the National Football League’s Buffalo Bills, and should either entity (or both in some kind of joint bid) buy the Bills, the club would move from Buffalo to Toronto on a permanent basis. There have long been rumours that the “Toronto Bills” would target land around Downsview Park or Woodbine Racetrack as the site of an NFL-sized stadium should the team indeed move.

If the Bills do move and this stadium becomes a reality before 2020, then Toronto (and likely Canada) suddenly has its signature World Cup venue already in place. If not, then the city and the federal and provincial governments willall be asked to chip in build a 75K-seat stadium that isn’t guaranteed to have a regular tenant after 2026, unless Toronto lands an NFL team or the stadium is renovated down to be a baseball-specific new home for the Blue Jays.

Given the existing stadia already in place, Toronto could take the lead role in a Canadian World Cup bid similar to how Johannesburg anchored South Africa’s bid in 2010 and Moscow will anchor Russia’s 2018 bid. Both cities had not one, but two World Cup venues — an 80,000-plus seat stadium capable of hosting the final and a relatively smaller stadium, seating around 50,000 fans, to be used for early-stage matches.

Some Canadian fans may cringe at seeing Toronto absorb so much of the World Cup action, but it’s possible that Rogers Centre, the NSS and the hypothetical 75K-seat stadium could all be used as venues if other cites are unwilling or unable to meet FIFA’s demands for world-class stadiums. FIFA generally prefers to limit a city to two venues at the most; Doha, Qatar is scheduled for six venues during the 2022 World Cup, though who knows what will end up happening with that troubled event.

Infrastructure-wise, while more work on the city’s notoriously clogged roadways would surely be necessary in advance of a World Cup, upgrades to Toronto’s highways and transit system are scheduled to be finished before the Pan Am Games. So, it could be said the Pan Am Games are both literally and figuratively paving the way for Toronto to host World Cup matches.

“Reputation matters internationally… they look at a city’s experience in the past and if they can do it again,” Novogrodsky said. “It just makes sense to hold a successful event. You build that base operationally, and build the enthusiasm amongst the broader community that makes them want to support pursuing future events. You need that base of public support.

“I think the Pan Am Games have a real opportunity to showcase Toronto and Canada’s diversity and the World Cup is another event that places a premium on a celebration of diversity. If that comes to the fore as we expect it will, as people are proudly cheering for both Canada and other countries that they identify with, that enthusiasm can carry forward into pursuing a bid for something like the World Cup.”

The city’s “Event Hosting Strategy,” cited in Motion MM30.50 is an important step in itself, Novogrodsky notes. It marks the first time the City of Toronto has looked to formalize its process for hosting and planning events, rather than have the city essentially start from scratch in deciding to pursue each major new event.

“It’s often been the case in the past that we’ve been reactive in pursuing potential bidding opportunities. We haven’t had a strategy the way that the federal government or Ontario does to guide our efforts in terms of which events make the most sense logistically or economically,” Novogrodsky said.

In short, Toronto will be going into a potential World Cup co-hosting bid better prepared to ensure that the costs and necessities involved in hosting several matches actually make sense for the city. It’s not completely out of the question that Toronto decides it isn’t feasible to join Canada’s bid, though given the infrastructure and semi-passable by FIFA standards stadiums already in place, it’s much more likely that the Centre Of The Universe will also be the Centre of Canada’s World Cup bid.