August 07, 2022
9 New Articles
Home Canadian Soccer The Association City of Champions: History on its side 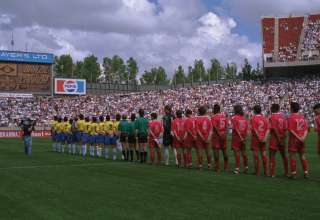 Edmonton has hosted the Commonwealth Games; it’s hosted the World Championships in Athletics. It’s been a part of every major soccer tournament that Canada has hosted — and, in 2015, it will host more Women’s World Cup matches than any other city. The reason for Edmonton’s prominence? Commonwealth Stadium: Even though it was constructed in the 1970s, it still remains the country’s premier sports venue that doesn’t have a roof Canada…

With one day, one game, Edmonton put Canada on FIFA’s radar as a nation that could host the really big tournaments.

A team of Canadian teens, led by tournament leading scorer Christine Sinclair, faced the United States in the final. And, on a summer afternoon in Edmonton, more than 47,000 people showed up to see the home team lose a 1-0 heartbreaker.

But the FIFA officials in attendance, including President Sepp Blatter, were stunned. FIFA’s brass had come to Canada with low expectations. Women’s youth soccer was supposed to maybe fill a section or two at cavernous Commonwealth Stadium. But, in Edmonton, they’d seen attendances rise steadily as Canada progressed. By the final, the stadium was nearly filled.

The success of that 2002 tournament put Canada on the map, at least in the minds of FIFA officials who vote on which nations get to host the big events. Since that Canada-U.S. final at Commonwealth, Canada has been awarded the U-20 World Cup, the Women’s U-20 World Cup and the Women’s World Cup.

“No matter where I go in Edmonton, when I ask people if they were there in 2002, someone always puts a hand up,” says Trish Zimmerman, who is the venue manager for Commonwealth Stadium for both the U-20 World Cup and Women’s World Cup. “So many people felt the magic of that tournament.”

Commonwealth Stadium also hosted the 2001 World Championships in Athletics. More than 400,000 tickets were sold for the 10-day event.

Edmonton will host more games at next year’s Women’s World Cup than any other city. Canada’s first two games will take place at Commonwealth Stadium. And the opening ceremonies will take place in the Alberta capital

But soccer hasn’t always filled Commonwealth, anything but. The truth is, Edmonton has been a hit-and-miss host city. And the reason is the stadium itself. It’s huge. It was built in for the 1978 Commonwealth Games, at a time when Edmonton had embraced Brutalist architecture in a big way. Edmontonians joke just how much parts of the city, with stark concrete buildings and boxy office complexes, looks like they should be in a brochure for the pre-glasnost Soviet Union. Edmonton’s communist-ish look inspired SCTV to write and film its famed CCCP episode, which saw the station taken over by Soviets. Edmonton, which hosted SCTV for most of its run, stood in for Moscow.

Nothing symbolizes Edmonton’s fetish for Brutalism better than Commonwealth. It is a sprawling, concrete behemoth of a stadium, with a track that rings the soccer pitch, or CFL football field. The upper deck hovers over the lower bowl, poised on concrete pillars.

It’s as if the design was meant to convey anger and cold, not warmth and hospitality.

And it is huge.

It seats 56,000 and, nowadays, it never, ever feels full. Not when the CFL Eskimos play. Not when international soccer is staged there. Canada enjoyed its largest crowds of the 2007 U-20 World Cup in Edmonton, but what most people noticed was that the stadium looked, well, empty. A crowd of 30,000 in Commonwealth gives off the atmosphere of going to a fringe sporting event. And, for three years, FC Edmonton played its Voyageurs Cup home matches at Commonwealth, because the football lines could be scrubbed off the artificial turf. For three years, crowds of a few thousand each made it seem like FCE was involved in closed-door games.

Finally, the decision was made to paint over the football lines at FCE’s cozy home, Clarke Stadium, for the 2014 Voyageurs Cup matches. FCE was more than happy to leave Commonwealth behind.

For most of the 1990s and right up till the opening of Toronto’s BMO Field in 2007, Commonwealth was the de facto home for Canada’s soccer programs. It was the only major outdoor stadium that could boast a grass field. Canada’s men, though, only got close to filling the stadium on one occasion: A crowd of 51,936 witnessed Eddy Berdusco score the equalizer as the national side drew the visitors from Brazil, who were preparing for the 1994 World Cup they would go on to win. Alas, once BMO opened and the majority of Canada’s matches went east, the grass was removed. In 2010, an artificial surface was placed in the stadium.

In 2013, the Canadian women’s team hosted South Korea at Commonwealth on a cold late October weeknight. A crowd of just over 12,000 showed up. That’s a far cry from that wonderful 2002 afternoon.

The stadium has undergone a renovation ahead of the major women’s soccer tournaments that are coming to the Alberta capital. A new sound system has been installed. A new video screen is in place. Two dressing rooms were renovated, and two new dressing rooms were added. Referees’ areas and medical rooms were upgraded.

And, while it’s easy to mock the concrete Commonwealth monster, you have to accept that it’s a symbol of how little Canada has done to improve its stadium inventory over the last 30 years. When Edmonton Mayor Don Iveson calls Commonwealth the premier soccer facility in the country, he just might be right. Olympic Stadium in Montreal might not last till 2026. BC Place is really the only other facility that enters the conversation.

“The legacy of running strong events is that we’ve got the facility already in place,” says Iveson. “[Commonwealth] is a great soccer stadium and we’ll prove that again this summer and next summer.”

So, for Edmonton to be ready for 2026, any federal or provincial funds that would come in order to help the city get ready for a World Cup would likely be used somewhere else than Commonwealth. Remember that the city is also bidding for the 2022 Commonwealth Games, so many improvements could be in place in time for the World Cup.

“The issue for us would be what other investments would be needed in Edmonton, because the stadium is close to ready to go,” says Iveson. “We’ve already invested heavily to bring it up to snuff for the Women’s World Cup. And, it’s the same international rules. So, depending on how much they change between 2015 and 2026, we’ll probably have the most advanced soccer stadium in the country. And we have it today, for this year’s events, with the advancements we’ve made.

“So, if a bunch of Canadian cities are going to get massive federal investments to support stadiums, our question would be, can you put money here towards LRT, for example, to make our city more accessible during an amazing event like that. Will you help us connect mass transit to our airport? The improvements we might need to make might not be stadium improvements, but other areas that are needed.”

But, while Iveson mentioned a rail link to the airport, which is located south of the city, he says that any infrastructure needs would have to be prioritized after a study is completed.

Iveson says that, as long as the eight to 10 cities that will be picked to be World Cup hosts are treated fairly, a World Cup is a win-win for everyone. While the province and the feds will  see the bulk of the tourism and tax dollars, the cities do also have gains to make, from boosts to local businesses from the fans who would come from all around the world. And, of course, the fact that the host cities would become household names from Vanuatu to Venezuela.

“I hope Canadian cities don’t get played off each other by senior orders of government,” says Iveson.

The mayor says that the fact that Canada is so big shouldn’t be held against a bid for the World Cup. After all, the World Cup is going to Russia in 2018, so a World Cup where fans have to fly to get from Vancouve to Edmonton to Moncton and Toronto shouldn’t be a major sticking point for the bid.

“The size of the country shouldn’t be held against the spirit of the  people. Figuring out how to move people is a good problem to have.”

In 2014, city council decided to defer any decision to building a new stadium  for FC Edmonton. The city approved a plan to replace the turf at Clarke Stadium — which is happening this summer — to one that won’t have football lines on it for soccer matches.

The City also backed a plan to support the expansion of Clarke Stadium from its current configuration of 4,500 to 10,000 if the demand warrants.

But, a decision to support a new soccer stadium, large enough for a Major League Soccer franchise if need be, was deferred. That would only come if FCE can show it could first regularly sell out its 4,500-seat home, then be able to then sell out a 10,000-seat Clarke. FCE would need to pass tests along the way. So far, the club hasn’t been able to hit the sellout mark on its 4,500-seat complex.

And council felt it was unfair to pin a future mayor or council to a plan made in 2014.

Coun. Bryan Anderson said it wasn’t in the current council’s interest to vote on a stadium plan that was “at least three council terms away” from being considered.

Of course, if Edmonton is a World Cup host city — and Canadian Soccer Association President Victor Montagliani said the city is definitely in the mix — the plans for new stadium to act as a support for Commonwealth may come back to council again.

But, Edmonton has come out in strong support for the World Cup bid. City council has already publicly endorsed the bid.

“We have a good relationship with the CSA, obviously, with this year’s Under-20 and next year’s Women’s World Cup,” says Iveson. “We’ve been working with them on producing those events. So, through those we have a sense of what’s involved in these events. But, obviously, the men’s World Cup is a whole other scale. A national event. Six to eight host cities. We would love to be one of those cities should it pan out. We think we’ve got a good track record of being a host for international events, going back to Commonwealth Games ‘78, Universiade, World Masters’ Games, World Championship in Athletics and, hopefully, the Commonwealth Games 2022.

“We have supplied them a letter of support for the bid, because we are excited for what it could do for the country — and for Edmonton.”