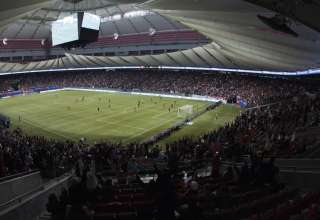 Vancouver lobbied hard to make sure it got the 2015 Women’s World Cup final. And, if Canada does win the bid for the 2026 World Cup, you can be sure that Vancouver will make every effort to convince FIFA and the Canadian Soccer Association that the final should be held there, too…

When you speak to those in Vancouver’s soccer community, there’s a genuine belief this city has played a significant role in Canada’s history with the beautiful game.

The region’s baby boomers still remember the glory days of the original North American Soccer League, when the Vancouver Whitecaps were the No. 1 sports club in town ahead of the Canadian Football League’s B.C. Lions and the Vancouver Canucks of the National Hockey League.

Then, the Whitecaps reigned supreme on the pitch as well, securing the 1979 Soccer Bowl, famously defeating the mighty New York Cosmos in the semifinals before overcoming the Tampa Bay Rowdies in the final in New York.

Even with Canada’s national teams, there have been plenty of connections. Of the 23 players that represented Canada at the 1986 World Cup, 15 players either played for or went on to play for the Whitecaps or the Vancouver 86ers at some point. Colin Miller, who moved to Vancouver at age 10, and was also on that roster, never played for a Vancouver club, but would serve as an assistant coach for the Whitecaps.

So that’s 16 players out of 23 with serious links to Vancouver. Not bad.

In the women’s game, Metro Vancouver has taken a lead role as well.

When Canada hosted the 2012 CONCACAF Women’s Olympic Qualifying Tournament, it was BC Place and Vancouver that were chosen to host.

Herdman regularly holds residency training camps with the women here, and this city’s love affair with the women’s national team will continue as Vancouver hosts the final of the 2015 Women’s World Cup next summer.

Given this history, if the fantasy of a World Cup in Canada were to become reality in 2026, Vancouver would be expected ‚ and would demand — to play a big role once again.

But where are things at right now? The Canadian Soccer Association has said it intends to bid to host the tournament, but has it reached out to any potential host cities?

Well, if it has, it seems Vancouver hasn’t had contact just yet.

Vancouver city councillor Andrea Reimer, herself a soccer fan who has played the gameas a goalkeeper at the highest amateur levels locally, says that, given a potential tournament is over a decade from now, it’s too early to have meaningful conversations just yet — and the city will have to wait for the provincial and federal governments to take the first steps.

“It’s a challenging landscape of sport hosting in Canada,” Reimer says. “Because of the way that our municipalities work under the constitution, we have extremely limited funding tools available to us and not a lot of jurisdiction — and all the revenues from major sporting events goes to senior levels of government — income tax, sales tax, all of the financial benefits.

“So, we look to them to take the lead on signalling an interest in being, particularly, financially involved in a major sporting event, before we would get committed to an event.”

How Vancouver Got the WWC Final

And, on that front, Reimer provided a look into how host cities were worked out for the Women’s World Cup.

“The venues were not put in as part of that bid, originally,” Reimer says. “The idea was, that we would get the bid, and cities signalled strong interest that we would wait to get the bid before the CSA and FIFA worked on what the venues would actually be…we were quite dogged, myself and the mayor, on working to get the final game here — as many games as we could, but particularly the final game.

“We felt — I don’t want to disparage any other city, because I think there are some strong soccer cultures in many cities across the country — but here in Vancouver it’s really come into its own in the past few years.”

“It blew us away how many people came out to support women in the sport,” Reimer says. “I’ve been a soccer player since I was five… I really have seen the divide between men’s soccer and women’s soccer really shrink in Vancouver. It’s almost non-existent now. I think the people that were cheering the women’s team on are the same people who come out in huge numbers to cheer on the Whitecaps.”

So if it is indeed senior levels of government which will need to take the lead, at least initially, what does B.C.’s government have to say on a potential 2026 bid? Plastic Pitch requested an interview with the minister responsible for tourism, Shirley Bond, and while that wasn’t granted, the ministry did provide a statement.

“Both the Government of Canada and Government of British Columbia would need to review the cost of the investment against benefits,” read the statement in response to a question on Vancouver possibly being a host city in a 2026 Canadian World Cup. “Significant economic returns were realized when Canada hosted the men’s Under 17 World Cup and the Under 20 World Cups for both men and women.

“Canada is also expecting significant economic returns when Canada hosts the FIFA Women’s World Cup in 2015. However, all of these tournaments are relatively low-cost compared with a men’s World Cup and, therefore, careful analysis would be required.”

Whitecaps President Bob Lenarduzzi is in his downtown Vancouver office, overlooking Burrard Inlet. He says the biggest challenge across Canada could be ensuring there are enough high-quality and high-capacity stadiums — and, beyond that, training facilities of a high enough standard to accommodate 32 top international sides.

But Lenarduzzi says Vancouver has the benefit of its recent 2010 Winter Olympic experience and much of the infrastructure that was built for that spectacle would reduce the need for the kind of substantial upgrades other potential host cities would have to invest in.

“Is it fantasy? It’s dreaming,” Lenarduzzi said. “But we should all be dreaming.”