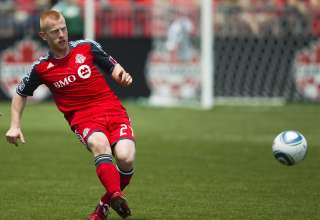 It was just a week ago that Toronto FC’s back line was a punching bag, having conceded stoppage-time goals in back-to-back games that cost TFC wins against Houston and New England.

Now, out of nowhere, the Reds’ defenders have become a strength — first it was Wednesday’s clean sheet victory in Montreal and, on Saturday, holding arguably the best attack in MLS largely in check throughout TFC’s 1-1 draw with the New York Red Bulls.

“The young back four are learning really quick,” said Toronto head coach Paul Mariner.  “I thought that was the best performance of the back four today.”

This was the second straight game that Jeremy Hall, Logan Emory, Richard Eckersley and Ashtone Morgan comprised TFC’s back line.  It would’ve been easy for the inexperienced players (Emory, at age 24, is the oldest) to fold against the pressure of such scoring dynamos as Thierry Henry or long-time TFC nemesis Kenny Cooper, but Jan Gunnar Solli’s fourth-minute goal was the only shot that New York put on net in the entire game.

Goalkeeper Milos Kocic credits Mariner’s 4-4-2 formation with TFC’s improved form (a 1-1-3 record since Mariner took over) and how even strikers Danny Koevermans and Ryan Johnson are able to contribute more on defence since they’re able to work as a tandem, with one able to drop back while the other stays as a downfield threat.

The Reds seem to have adapted well to Mariner’s system as opposed to the 4-3-3 preference of former coach Aron Winter.  Mariner took a small jab at his predecessor’s system in praising how his side has become more competitive.

“It’s not beautiful flowing football, but we’re a little harder to beat than we have in the past,” Mariner said.  “If you’re a hard team to beat in this league and stay in the game with the likes of Ryan, Danny and Torsten [Frings] with his service you might be able to nick something.”

After New York jumped out to an early lead, it was Frings and Koevermans who combined just two minutes later to level the score.  Frings sent a corner kick to the front of the net and Koevermans simply outjumped his defender to head the ball into the net.  After struggling with injuries and missed chances earlier in the season, the red-hot Koevermans has now scored eight goals in his last 10 games.

Frings and Koevermans almost combined again in the 45th minute but the striker’s touch of Frings’ pass went just wide of the right post.  That was arguably TFC’s next-best chance of the game, as the two defensively-challenged sides (Toronto and New York have allowed the second- and fourth-most goals, respectively, in MLS) didn’t find the scoreboard again after the wild opening six minutes. The Red Bulls’ top opportunity of the second half came in the 76th minute, when midfielder Joel Lindpere took a through ball deep into TFC’s end, but Emory was in position for a brilliant tackle and clearance.  It was a headline play for Emory, who Mariner said got the start due to Doneil Henry being sidelined due to an allergic reaction.

“Logan Emory, for me, is an unsung hero,” Mariner said.  “He’s one of those guys that goes underneath the radar.  He quietly goes about his business very, very well.”

The coach didn’t go into detail about Henry’s condition, other than to say that the defender had to make a late-night visit to the emergency room.

In other fitness news, Julian de Guzman was a late stretch from the Starting XI due to a stomach illness and was replaced by Reggie Lambe.  De Guzman did make an appearance in the game, coming on as a substitute in the 79th minute.

The Reds will have little time to enjoy their good result, as they play on Wednesday in Dallas and then on Sunday in Philadelphia.  TFC is now halfway through a tough stretch of 10 games in 33 days, but the busy schedule seems to be forcing the club to gel quickly with their new coach.

“There’s a bond forming and every player is playing for their teammates and their manager,” said midfielder Terry Dunfield.  “There’s no hiding from it, we’ve had a gruelling schedule since Paul has taken over, but you can never complain about taking a point from arguably the best team in the league.”