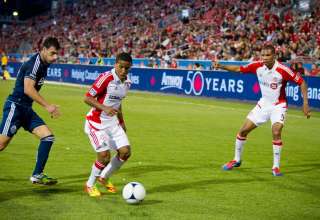 Joao Plata is still a member of Toronto FC, though this apparently could be news to Plata himself.

The rumour mill has been swirling with talk that Plata could be headed back to his native Ecuador to play for LDU Quito, but TFC director of team and player operations Earl Cochrane denied that a move is imminent, though the club has been presented with offers.

“A couple of weeks ago we had some clubs ask us about his services,” Cochrane said.  “We’ve toyed with the idea and continued to kind of think about whether to loan him out.  Quito was one of those clubs, and a couple of clubs in Mexico also.”

Cochrane specified that TFC isn’t looking to sell Plata outright, just possibly send him out on a short-term loan to create room under the salary cap.  The team feels the 19-year-old forward still has a bright future in Toronto, and Cochrane noted that Plata is still under contract through 2014.

“We look at Joao as a great asset, someone who we don’t want to give up.  Teams in the league have asked us about him,” Cochrane said.  “He’s not a guy we want to lose or trade, we want to keep him close.  The idea of putting him somewhere for six months and getting him back in January, and allowing us to free up the space to….get a guy we need in a bigger area, is something that we’re entertaining doing.”

Plata had a different story, telling Nestor Hernandez of MLSSoccer.com that he was heading to Ecuador on Monday, either to finalize a deal with LDU Quito or with Mexican side Pumas UNAM.  The striker was seen shaking hands and saying his goodbyes to teammates in the TFC dressing room, and Plata’s nameplate had been removed from above his locker.

The forward also had a goodbye message on Twitter (@JoaoPlata10) for his followers, tweeting “It has been a pleasure playin 4 Toronto FC. I want 2 give much thanks n luv 2 the fans 4 all the support during my time here.”

Nevertheless, TFC officials state that Plata is still with the team and is expected to be present on Tuesday when the Reds fly to Texas for Wednesday’s match with FC Dallas.

Reds head coach Paul Mariner said that Plata’s statements were news to him.

“I love that, when 19-year-old kids come in and tell the press what’s going on.  Isn’t that a wonderful situation for me to be in?” Mariner joked.

Plata has dressed for two games but has yet to see the pitch since Mariner took over TFC’s head coach on June 7.  Plata has been sidelined with a hamstring injury for the last three games but Plata told Hernandez that he’s fit.  Mariner said that Plata’s injury wasn’t serious and that he even considered putting him on the bench for Saturday’s game against New York.

Plata began his career on LDU Quito’s youth team before being loaned to MLS and drafted by the Reds in 2011.  He has scored 10 goals in all competitions for the Reds, including six in CONCACAF Champions League games.  Plata signed a full-time MLS contract last winter.

Cochrane also said the Reds have had informal discussions about Alessandro Nesta, the Italian international defender who has been linked to a move to Major League Soccer.  Cochrane said the team hadn’t contacted Nesta or his representatives, and that Nesta might not be able to fit under the team’s salary cap unless Plata is loaned or other personnel moves are made.

“Nesta is a player who came across our desks.  We’ve talked about it internally but haven’t taken it any further than that,” Cochrane said.  “If we think he’s a guy that can help us, we’ll reach out to him.”