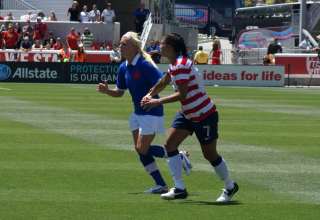 For the second time this month, United States and Canadian national teams squared off in friendly action on the soccer pitch. This time it was the women’s teams doing battle at Rio Tinto Stadium in Sandy, Utah in a send-off match ahead of next month’s London Olympics.

Coach John Herdman felt that this result showed that his Canadian team is ready for next month’s Olympic tournament.

“We’re one goal away from the potential gold medalist, and I think that’s a reality,” he explained. ?“In January, we were four goals away. We’ll try to bridge that gap in the next few weeks.”

The top-ranked U.S. women dominated the action in the first half, but it took a deflected own goal by Canadian defender Carmelina Moscato to give the American’s the 1-0 lead at the half and the visitors nearly equalized in first half stoppage time.

The goal was an intended cross by Megan Rapinoe in the 15th minute who was would set herself apart as the star of the opening 45, as she constantly seemed to find the ball at her feet. The attempted cross was behind Moscato who stuck out her leg to deflect the ball away from danger, but she ended up watching in anguish as it went into her own goal.

For much of the rest of the half, the U.S. squad set up shop in the Canadian end of the field. Rapinoe delivered two beautiful crosses from free kicks into the penalty area. Both balls were directed at Abby Wambach, but her attempted header on the first attempt and her right-footed poke at the second both went astray.

In stoppage time of the opening half, both sides had clear opportunities. The first came from the Canadian side. Captain Christine Sinclair wound up for a shot from outside the area. The ball was deflected of the foot of an American defender. The redirect caught Hope Solo going the wrong direction across her goal mouth, but she had just enough time to recover and get a hand on the ball to deflect it before ultimately scrambling on top of the ball near the post.

Moments later, Alex Morgan broke out for the U.S. along the left side. She was draped by two defenders, but stopped abruptly with the ball creating space on her right foot. Her shot seemed to be destined for goal as keeper Erin McLeod was off her line, but defender Lauren Sesselmann came out of nowhere to save the ball off the line, preserving the 1-0 score line at the break.

While the first half was mostly all U.S., the Canadian team showed a lot of grit and fight in the second half. It slowed down the American attack, and found some opportune moments to create its own chances. The first of those after the break would prove to be the most fruitful.

Sinclair found herself in transition on the right side of the park, and the — earning her 181st cap with the team — saw an opportunity as substitute Melissa Tancredi was making a break along the left side. She swung the ball to the racing forward, who was able to pick out a spot past keeper Hope Solo to bring the game level at one goal apiece.

“We came at them when we could,” explained Tancredi about the goal. “We took advantage of our chances, and that’s all you can really ask for.”

With some back-and-forth action for the remainder of the game in which it appeared that players on both sides were losing steam in the heat, the sense was that the game may end at 1-1. However, the U.S. side had a spectacular buildup along the left side of the field in the 85th minute. That buildup culminated in a pass from Rapinoe into Wambach, who controlled the ball and then made a deft back heel pass to Amy Rodriguez who had nothing between her and the goal except grass. She was able to easily put the ball away, giving the U.S. team the 2-1 victory.

The result left both sides satisfied.

“I’m very happy with the team, because it is a team,” said U.S. Coach Pia Sundhage after the match. “We’re ready.”

Her counterpart, Coach Herdman, feels good about his team’s showing as well. “When you come up against the States you know that they would have the lion’s share of possession and probably dominate things, so there is something about being tight and staying in the game and that’s what we did.”

Both squads will have some last-minute training over the coming weeks before embarking on London in late July where the two squads are hopeful that they’ll once again cross paths en route to a spot on the medal stand.