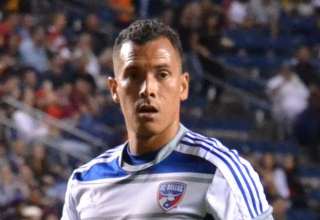 The Vancouver Whitecaps are still without a win in the Lone Star State.

On Saturday, the visitors fell 2-0 to FC Dallas through a Brad Rusin first-half own goal and an opportunistic Blas Perez finish just after halftime.

The opener came 29 minutes in, as David Ferreira whipped in a ball from a corner which ricocheted off Rusin’s back and past Lee Young-Pyo and Joe Cannon, who couldn’t stop the ball on the line. Defender George John deserves credit for his work on the play, as he barged into the box, which seemed to cause Rusin to lose his balance at the crucial moment.

“I thought we defended [corners] quite well,” Whitecaps defender Andy O’Brien said on the radio broadcast following the match. “But the one that ended up bouncing in the six yard box and ended up hitting one of our lads and going in.

“That’s a bit disappointing to concede from a corner, but I said before the game that we haven’t hit fifth gear in any games this season really on a consistent basis, so it’s something we need to work on.”

FC Dallas then scored their second of the match on 50 minutes on a bit of a fluke play, as Perez pounced on a Kenny Cooper shot which was deflected right into his path by Lee, heading home from close range.

“Two deflections that we’ve lost goals from,” head coach Martin Rennie said of Dallas’s goals. “So that’s very frustrating. In both situations we could have avoided the goals. The first one, we’ve let a player on the counter-attack turn, which we shouldn’t have.

“As soon as he turned, he had about four passing options, so that was a mistake. And the one before that, I thought we could have defended better before we gave the corner away.”

But, Vancouver’s mistakes weren’t restricted to the defensive end. Matt Watson had an excellent opportunity in the 41st minute following a poor clearance by Dallas goalkeeper Raul Fernandez, but couldn’t convert on an open net, attempting a weak shot which John managed to get back for to clear off the line.

This latest road defeat means the Whitecaps are now winless in five, and overall in 21 road games under Rennie have just three wins.

“The road concerns – obviously it’s something that we need to work on,” Cannon said of the club’s horrendous road record. “It’s pretty glaring. But in all honesty, in this league, you just have to make sure you finish strong. For us, we can’t worry about results right now. We have to figure out what the heck has gone wrong with us – why aren’t we getting these results?

“Whatever we’re doing, it’s not working.”

Perhaps in a bid to try and change a losing team, Rennie made some surprising decisions. Darren Mattocks was left on the bench along with Gershon Koffie and Camilo, while Tom Heinemann started his first game for the club up top.

Matt Watson also made his first start of the campaign in the centre of midfield.

Heinemann had a big chance in the final minutes but fired a weak shot which Fernandez gratefully gathered with ease.

“When he had his chance at the end, he was exhausted I think,” Rennie said. “He didn’t do the job that we would have looked for on that, but I think it was just fatigue at that point.”

With this result, the Whitecaps fall to 2-3-2, but they’ll have a chance to bounce back against FC Dallas at BC Place next weekend in their next MLS match. Before that though, they’ll square up against FC Edmonton in the first leg of the Canadian Championship semi-final on the road.