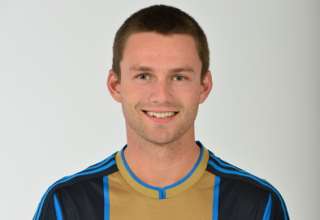 Is it safe yet to begin the “how many players were drafted ahead of him” talk about Jack McInerney?

The Philadelphia Union forward scored twice in a 3-2 win Sunday over D.C. United, and earned enough votes from the membership of the North American Soccer Reporters to take the MLS Player of the Week honour. McInerney got 17 of the 27 first-place votes cast by the members.

With six goals on the season, McInerney has taken over the MLS scoring lead.

And while it’s early in the season, McInerney’s fine form has answered the preseason question: “who the heck in Philly is going to score goals other than Sebastien Le Toux?”

McInerney was chosen seventh in the 2010 MLS SuperDraft. In other leagues, seventh pick is still a relatively high one. But, in MLS, by the middle of the first round, you are already dealing with crapshoots. A good No. 7 pick is a great value. So, let’s take a look at who was taken ahead of McInerney:

Of the six ahead of him, you can claim McInerney has had more of an impact than five of them. Loyd has been good for FC Dallas, and, in retrospect he was a steal at No. 5. But, for Philly, which has three picks that season in the top seven, it’s clear that the third of the three is the biggest jewel in the crown.

How The 11 voted: McInerney. Our No. 2 vote went to Real Salt Lake’s Nick Rimando, the ageless goalkeeper who may go down as the best ever in MLS to play the position when he calls time on his career. Rimando stopped a penalty and made other key saves as RSL beat Chivas 1-0. RSL needed every save out of its keeper.