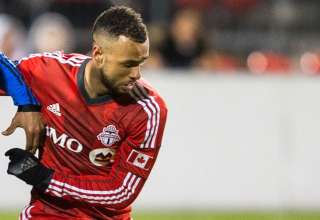 Time will tell if Toronto FC has really turned the corner or if this is just the latest of the club’s many “fresh starts” that will eventually become a false start. While there were several shaky moments for TFC during its 2-1 win over Sporting Kansas City, however, just getting the three points has to be seen as a ray of hope.

It was the Reds’ first league victory since July 18, 2012, a garish 15-match drought that stretched across two seasons following TFC’s 1-0 loss to Vancouver in last weekend’s season opener. So many of those poor results (and really, so many poor results over TFC’s first six seasons) occurred due to late-game breakdowns, and once Sporting cut the lead in half on Claudio Bieler’s 77th minute goal, deja vu set in for many of the 25,991 in attendance at Rogers Centre. KC had a few quality chances in the closing minutes, yet the Reds held steady and escaped with the win.

It’s a sign of the culture change that Ryan Nelsen is trying to establish within the club that the coach actually preferred the match’s tense finale.

“I’m kind of glad it was 2-1 instead of 2-0. It showed we could work through a bit of adversity,” said Nelsen, who picked up his first head coaching victory. “Maybe the [fans] in the stadium would disagree with me but it was nice to win with a bit of pressure.

“There’s been a few mental scars over the past couple of years and to grind a result like this, you need mental strength, you need character.”

To this end, the veteran players brought to the club by GM Kevin Payne over the offseason have helped the team, in the opinion of captain Darren O’Dea. The centre back spot next to O’Dea, for instance, looked much more stable in the hands of veteran Danny Califf than it did with the revolving door of youngsters who were asked to fill the role in 2012.

“These are players who have been in these situations. Not to slag off young players, but you only know what it’s like when you’re in the positions and Danny has been in these positions for years,” O’Dea said. “It’s a bit of experience and mental toughness and we lacked a bit of that last year.”

While TFC did well to stifle Sporting during the first half and create attacking pressure, the Reds were also greatly aided by an overall sloppy performance from the Kansas City side. In the third minute, defender Matt Besler made an ill-advised pass attempt in his own box that was picked off by TFC forward Robert Earnshaw and converted for a goal.

Toronto’s second goal came on another KC error. After John Bostock (making his TFC debut) made some nifty moves to get inside the box, midfielder Paulo Nagamura had no choice but to trip him, leading to a penalty kick. Earnshaw stepped to the mark and buried a shot into the left side of the net for his second goal of the match.

“I changed my mind right at the last minute because I saw [the goalkeeper] take a step,” Earnshaw said. “It was important for the team that it came so early and getting the second one as well, it relieved a lot of pressure and helped the team settle down.”

Good fortune aside, it’s still a major positive for TFC that they not only played well, but did so against a Kansas City team projected by many to be an MLS Cup contender this season. Between beating a good team, Earnshaw converting, Bostock creating havoc and the improved back line largely holding the opposition at bay, TFC’s home opener checked a lot of the boxes in regards to what it hoped to achieve from a substantial (and still ongoing) offseason rebuilding project.

Maybe it’s just something about playing at Rogers Centre that helps the Reds. It was just over a year ago that TFC played its last competitive match under the dome, a CONCACAF Champions League tie against the L.A. Galaxy (another superior side) that saw the Reds get a quick two-goal advantage only to fritter away the lead and settle for a 2-2 draw.

TFC went on to upset the Galaxy in Los Angeles and advance to the CCL semi-finals, a result that at the time seemed to portent a breakthrough 2012 season for the Reds…and we all know what happened after that. Just as Rome wasn’t built in a day, neither will Toronto FC, this win over Sporting notwithstanding.

“We’re still a long way away from where we want to be. I’m so pleased with the win….but it’s a step forward,” Nelsen said. “There was improvement [last week] in Vancouver, improvement today and we’ve got to take baby steps, in a way, to become a very good team. Yes, this will help but we’ve still got a lot of work to do.”