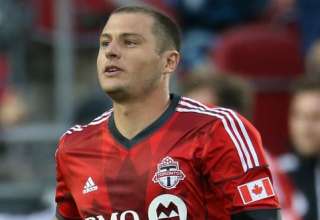 Toronto FC was ever so close to one of those gutty victories that can potentially turn a season around, and in the eyes of head coach Ryan Nelsen, his team has plenty to be proud of after a 1-1 draw with the Philadelphia Union given the match’s circumstances.

And yet, a draw isn’t a win. As well as the Reds played, even when down to 10 men for over half the game, they still missed out on two extra points after Jack McInerney’s 91st-minute equalizer.

If that description seems familiar, it’s because McInerney also scored in the 91st minute on April 13 at PPL Park in another 1-1 draw between the two clubs. Toronto FC’s late-game breakdowns have reached a new level of deja vu — not only are the late concessions continuing, it’s even the same opponents who are scoring.

Following a corner, the ball bounced into the scrum in front of the net and then out to McInerney, who was wide open on the right side of the box. The forward booted it along the ground and inside the left post for his 10th goal of the season, temporarily putting him ahead of Montreal’s Marco Di Vaio in their battle for the league lead in scoring.

Even though the Reds were a player short, it beggared belief that McIlnerney (just named the MLS Player Of The Month for May) was the one left unmarked at such a critical point in the game. Nelsen was quick to defend his players’ effort.

“If the ball went a yard on either side of [McInerney] it would’ve gone away and we probably would’ve won the game,” Nelsen said. “You can’t blame the guys there. Three of four of them went to win the ball… four or five went in to charge it down. If you block it, we’re saying it was courageous defending.”

The draw extended TFC’s winless drought to 11 games (0-6-5) and of all those poor results, Saturday’s match may have been the most galling given that the Reds clearly looked superior to a lacklustre Union side. Toronto dominated possession in the opening half by a 63-to-37 per cent margin over Philadelphia and yet not only was it unable to score the go-ahead goal, its efforts were hamstrung by centre back Doneil Henry.

In the 26th minute, Union goalkeeper Zac MacMath grabbed the ball right on the line of the box, leading some Reds players to argue that the ball was over the line and still live. Henry made a move for the ball and kicked it at MacMath, who took exception and shoved the defender. After a mild skirmish on the field, both men received bookings.

Fourteen minutes later Henry received another yellow card, this time for a hard tackle on midfielder Danny Cruz just outside the box that was just inches away from earning the Union a penalty kick. Henry was shown the red card for his second booking of the match, putting TFC down to 10 men.

In Nelsen’s opinion, referee Geoff Gamble was employing a double standard and lacked “the common sense to say to Doneil on that second yellow card, ‘you’re really on thin ice here, next time I’ll give you one,’ which the good referees do… But, if you go by the letter of the law as the inexperienced refs do, and he sent him off.

“The emotions can take over and I’m obviously biased, but it was an extremely soft sending-off. Their goalkeeper pushed and shoved one of our players, starting the whole thing… If you’re going to go to the letter of the law, like [Gamble] has for Doneil’s two yellow cards then, by the letter of the law, MacMath gets sent off.”

Nelsen and TFC president Kevin Payne have been vocal in their displeasure about refereeing during their club’s games this year but it was hard to fault Gamble for what looked like a clear bookable offence on Henry’s part. The young defender had little room for error on the play and it was a mistake on Henry’s part to be so aggressive when he already had one caution to his name.

Even down a man and with the possession stats swinging the other way in the second half, however, the Reds remained on the front foot and still outshot Philadelphia by a 3-2 margin in the final 45 minutes. It seemed as if TFC would overcome the odds when Jonathan Osorio headed in a tremendous cross from substitute Jeremy Brockie in the 61st minute to put the Reds into the lead.

It was Osorio’s third goal of the season and it topped off an important week in the 21-year-old’s career. Osorio made his senior debut for Canada in Tuesday’s 1-0 friendly loss to Costa Rica and then received his second MLS start for TFC on Saturday. While the Reds have been making moves to shore up their midfield, Osorio’s performance made a strong case for more playing time.

“It was a lovely goal, a really well-taken goal,” Nelsen said. “[It’s good] to have a player at such a young age with so little experience to show the maturity he does, the confidence. He has a little swagger about him, and he’s one of the hardest-working guys on the team. It’s nice to see a young man mature like that, especially for Canada.”

Even the goal, though, was still just a silver lining for Osorio amidst the dark cloud of another tough result.

“I’ll look back at this sometime in the season and be happy but the fact is we tied,” Osorio said. “Some people will look at this as two points lost, but we were a man down, and at the beginning of the half people probably thought we weren’t able to pull it off. Then there we are again in the last 10 minutes, we should have won and let it slip again.”

The draw was also bittersweet for Danny Koevermans, who made his first appearance since July 14, 2012 when he entered the game as an 85th-minute substitute for Brockie. Koevermans’ return from a torn ACL drew a loud reception from the BMO Field fans and yet the forward couldn’t celebrate a win.

Koevermans has seen TFC do this too many times of his 10 and a half months of rehabilitation, and it was clear the striker was no longer satisfied with good efforts unless they lead to three points.

“We’ve been saying it so many times, “yeah, we do well” but we don’t win. I just want to play bad and win,” Koevermans said. “Today I’m so happy that I came on, the fans gave me a warm welcome, everything is perfect, I’ve been working hard for this moment…but at the end of the day my team gives up the equalizer and I just leave the field feeling horrible.”