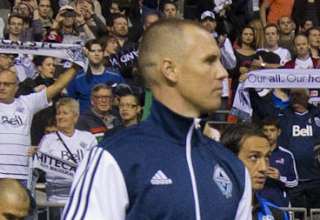 After losing the Canadian Championship final in heartbreaking fashion on Wednesday, it would have been easy for the Vancouver Whitecaps to have a stinker of a game Saturday in New Jersey.

Little time for rest, a long trip from the Pacific Coast to the Eastern time zone, and not enough time to shake off the emotional final minutes of Wednesday’s game — a game that saw the Montreal Impact find the saving goal it needed to snatch the Voyageurs’ Cup out of the Whitecaps’ waiting hands.

But, something funny happened at Red Bull Arena. The Whitecaps came up with some late magic — and won its first road game of the MLS season. A 2-1 triumph over the Red Bulls was more than just three points for Vancouver; it was a statement to the fans back in British Columbia that this team wasn’t going to roll over.

The game was played in hot, steamy conditions — tough sledding for a team that hadn’t got much training in between Wednesday’s Voyageurs’ Cup final and Saturday’s match three time zones away. But, after going down 1-0 early in the second half, the Whitecaps rose after Young-Pyo Lee came on as a sub for the injured Greg Klazura at right back.

Klazura was unfortunate to inadvertently redirect Jonny Steele’s low cross into the Whitecaps’ goal. But, after the own goal, Klazura struggled and needed to be replaced, forcing coach Martin Rennie to use the veteran Lee, who was supposed to be getting some rest and simply on the bench for cover.

It was Lee who pumped in the cross that the Red Bulls’ defenders couldn’t deal with — and Jordan Harvey pounced and rifled a half volley just under the bar. For Harvey, it was a chance to at least partially atone for a late chance to win Wednesday’s game that he rifled just wide. No, the goal didn’t come with a trophy on the line, but it showed that Harvey wasn’t going to be shy about shooting; he would still keep smashing away.

The Whitecaps were then thrown an advantage when Red Bulls’ defender Jamison Olave got is second yellow with 15 minutes left in the match. And the ‘Caps took advantage in the 82nd minute. Russell Teibert’s cross was met by Kenny Miller’s head after the Scottish international made two clever runs.

You hear strikers tell you that they make two runs — one to fool the defender, the other to make himself available to a teammate. And that’s what Miller did. He made as if he was going to the far post, sucking in Red Bulls defender Kosuke Kimura. Then, Miller cut across Kimura to head the ball home.

But, before the cross came from the right side, it was set up by a series of passes down the wing between Daigo Kobayashi and Lee which eventually opened a channel for Teibert to take a lobbed pass down the right side.

Sure, the Whitecaps looked off of their game in the first half — but they weathered the storm. Juninho controlled the game from the Red Bulls’ midfield and, frankly, both Whitecaps Matt Watson and Jun Marques Davidson didn’t do enough to take away space in the middle of the park.

It was Juninho who was left unopposed to dink a fourth-minute pass over the Whitecaps’ back line for Thierry Henry to get; but the French striker couldn’t chip the ball over Vancouver keeper Brad Knighton.

Juninho also had a long effort curve just over the bar. In the 14th minute, he was allowed to slide a ball to Henry, which then went to Fabian Espindola. Knighton made a good diving stop to thwart the Red Bulls’ attack.

But, considering the emotions and fatigue that the Whitecaps had to endure, along with the heat and humidity in New York, it had to be expected that the visitors would try and simply survive the first half. They did.

And then they showed their fans some character.