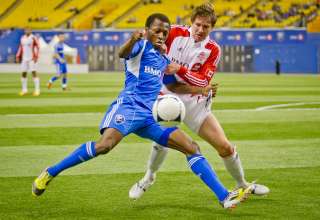 Playing to a draw is usually the best a road team can hope for. Toronto FC came out of the first leg of its Amway Canadian Championship encounter with the Montreal Impact having achieved its objective, playing to a scoreless tie and setting the stage for next Wednesday’s second game.

“It was pretty clear what their intentions were in coming here,” declared Impact head coach Jesse Marsch in his post-game remarks.

“I think we had some good moments in the first half that could have led to a goal but we weren’t able to pull off a play,” he continued. “They came here and sat back and didn’t want to give anything away and they did it. I expected them to show a little more fight and energy in the midfield … As the second half went on, because we didn’t have a lead they were able to pack it in even more which made it more difficult for us to find a way to break them down.”

In a first half that saw the team feel each other out for the first quarter-hour before the field seemed to tilt towards the visitors’ net, Montreal completely dominated play and put four shots towards the enemy net, three of them on target, while Toronto’s only attempt went wide.

TFC goalkeeper, Milos Kocic, was the single reason his side made it out of the opening 45 minutes without going down at least a couple goals as Montreal repeatedly attacked along the left flank, its most dangerous asset being Lamar Neagle.

Starting in place of injured midfielder, Justin Mapp, he was the driving force behind the Impact’s attack in the 70 minutes he played before Sinisa Ubiparipovic subbed in for him. Giving every indication he wants to be among the starting XI more frequently, he put one over the bar in the 25th minute, and, taking a Tyson Wahl pass two minutes later, charged the Reds’ goalmouth, his progress thwarted just short of his objective.

In the 30th his centring pass just missed connecting with Sanna Nyassi as the speedy forward bore down on Kocic’s net. The keeper showed he was in the game once again, deflecting a Corradi shot over the net, the Italian striker having been served by Jeb Brovsky, who got the starting left back assignment tonight since the incumbent Zarek Valentin, suffered a bruised calf in Saturday’s game against Portland

Toronto’s only viable possibility came in the fifth minute and was nullified by a steadfast Matteo Ferrari, who stopped oncoming forward Reggie Lambe at the edge of the penalty area.

Midfielder Julian de Guzman, along with the missing Danny Koevermans were the only threats in last month’s match-up between the clubs, was discreet all through the first half, only leaving his post only occasionally to attempt brief but easily countered attacks.

The tilted field was evident as the second half got underway, with the host side threatening early on a couple occasions. Nyassi went in alone in the 50th minute only to be thwarted by Kocic and three minutes later he took a Brovsky pass and headed it netward only to have Reds’ defender Adrian Cann deflect it over the net.

The Toronto club went into a defensive shell for the last half of the match, putting as many men as possible behind the ball in their attempts to draw the game. The strategy worked.

Looking on the bright side, Marsch declared, “It’s good to have a clean sheet. We go there and any tie with goals or a win on our end and we go through. I thought our ideas and our attempts to break them down were good but they just put a lot of numbers behind the ball. The good part was that we didn’t tax too many players. We’ll be ready for the weekend and we’ll be ready for the second leg. Unless one team goes up big in the next game, the end of the game there will be crazy so I think we have to be prepared for that.”

Toronto coach Aron Winter also pronounced himself satisfied with his men’s efforts. Today’s result was the first time this season in a non-CONCACAF Champions League match that the Reds did not come out on the short end of a score.

“We tried to defend and I think we did a good job. Each game is important. For the confidence of the players it is important to get a good result.

“I think everybody played real well. There was a big difference between the first and second half,” he said. “I think the whole team deserves a compliment because in the situation we are now, each result, each point is very good.”

The teams get together again next Wednesday at BMO Field.

• Montreal’s uberfans, the Ultras, unveiled their 10th anniversary banner, easily a hundred feet wide and 50 ft. long, as the final strains of “O Canada” drifted away, unrolling their tifo from the press gallery level to a loud round of applause from the 13,405 fans present.