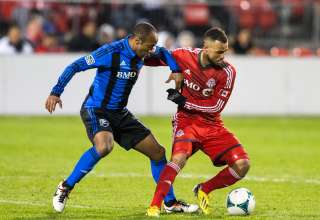 The Impact is going to need its own version of the “Miracle In Montreal” if it’s going to finally defeat Toronto FC in an Amway Canadian Championship series.

The Reds took command of the tie with a 2-0 win in the opening leg at BMO Field, putting the Impact in dire straits as they head to Saputo Stadium for the reverse fixture on May 1. Granted, the Impact’s hole is not as large as the one TFC dug themselves out of in 2009 (when their 6-1 win in Montreal overcame a huge goal-differential deficit and clinched the club’s first Voyageurs Cup) but the Reds’ current two-goal edge gives the Impact have little room for error next Wednesday.

“We’re definitely capable of scoring two, three or four goals in a game,” goalkeeper Evan Bush said. “When it comes to Cup games crazy things happen and hopefully we can get on the board early next week, dictate the play and get the result we need.”

The Reds are now 7-0-2 all-time against Montreal in Voyageurs Cup play. It scarcely seems to matter who wears the jerseys for either club in this competition, whether it be the first-choice starters or, as was the case on Wednesday, many of the backups.

“No offence to anybody but to be fair it was pretty much our reserve team out there, a lot of us young boys,” midfielder Emery Welshman said.

“We know the rivalry between Toronto and Montreal a little bit more than the foreign players so it means more to us GTA guys especially because we’re from right here. It was great, it something I’ll never forget.”

Justin Braun and Ryan Richter were the only members of TFC’s Starting XI who also played in the team’s last league match on Saturday against Houston. Welshman was one of five Canadians in Toronto’s lineup and it was one of those local products, Brampton’s Doneil Henry, who opened the scoring.

After a lacklustre first 45 minutes from both sides, TFC shot out of the blocks in the second half. Following a corner in the 49th minute, the ball was batted around and out to Jonathan Osorio, whose shot attempt was blocked. The ball went right to Henry, however, who blasted a brilliant right-footed shot past Bush and into the net.

It was Henry’s first goal of the season and a big breakthrough for a player who had played just two minutes for TFC in 2013 after being a regular for much of the previous two seasons. As impressive as Henry’s goal was, however, TFC head coach Ryan Nelsen was more taken with his young defender’s overall game.

“The icing on the cake is the goal, obviously, but I like to see what he did in the other 93 minutes besides that little 10 seconds of brilliance. The other 93 he was very solid and he did very well,” Nelsen said.

Braun threatened with two more attempts soon after Henry’s opener and TFC finally added another score in the 84th minute. Striker Andrew Wiedeman, another little-used player, scored the second goal after collecting a long, well-placed pass from midfield from Luis Silva. Wiedeman outpaced two defenders and fired the ball home to give the Reds the all-important extra cushion.

The result not only puts TFC a step closer to the Voyageurs Cup final, it also gives the club a boost after a run of four straight draws in league play, three of which were tied by the Reds’ opponents in stoppage time.

Toronto’s last loss came on March 16 against, you guessed it, the Impact. Montreal’s 4-1-1 start to the MLS season has put added focus on the club’s league play, which is why so many of the team’s top players were on the bench or (in the cases of Marco Di Vaio, Davy Arnaud or Alessandro Nesta) didn’t even make the trip to BMO Field, even though the Impact was playing its first game in 10 days.

“For Nesta or Marco Di Vaio you can’t play today and also be fresh on Saturday,” coach Marco Schallibaum said.

The Impact was outshot 16-4 in the game and they didn’t record a shot on goal, but Schallibaum simply chalked the poor performance up to the inexperience. Hassoun Camara, Jeb Brovsky, Justin Mapp and captain Patrice Bernier were the only regulars starting in Montreal’s youthful lineup.

“They showed me during the week that they are ready but this is different when you have some pressure and some tension,” Schallibaum said. “It’s a Cup fight, it’s not another game. It’s a pity for some young players but these mistakes are very hard for us.”

This league-first attitude bodes well for Toronto’s chances in the second leg. While it’s fair to say that the MLS playoffs are a much more realistic goal for Montreal than they are for the Reds, TFC can’t be faulted for wanting to claim whatever silverware it can get, especially if it means capturing its fifth straight national title.

“All [TFC’s players] care about is winning,” Nelsen said. “I don’t care what competition it is, even if they have to play for a bag of cobwebs, I don’t care. Guys go there and try to win.”