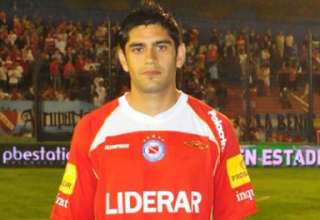 Toronto FC has finally completed the deal that makes Argentine midfielder Matias Laba a a Red.

To say that Laba is one of the most-anticipated roster moves in the history of the club would be accurate. The team’s supporters have been salivating for a true marquee player since Dwayne De Rosario’s stormy separation from the club back in early 2011.

The Reds announced on Friday that the Laba deal was now official.

“Matías Laba is one of the top young talents in Argentina and we are delighted to have him join Toronto FC,” said Toronto FC President and General Manager Kevin Payne in a release issued by the club. “He is a modern central midfielder and we expect him to be a mainstay of our team for years to come.”

Laba represents a different type of TFC (and MLS) signing; usually, when we see Argentines, Brazilians or Europeans come to the league, they are either a) much older that Laba (21) or b) young players who can’t escape their current clubs’ reserve squads. Laba has already made 72 appearances for Argentinos Juniors, and played in every game for Argentina at the 2011 U-20 World Cup.

Argentinos Juniors, in a release issued by the club on Thursday, said the board approved the Laba sale as “it will leave a very beneficial cash income for the club.” That cash income is rumoured to be in excess of $1 million which, in MLS terms, is huge in terms of laying out for a transfer.

The key is going to be how a TFC fan base that’s been waiting for a marquee player will adjust to the fact that Laba’s not a goal-scorer. He didn’t score at the U-20s and didn’t score goals for Argentinos Juniors. He shouldn’t be under pressure to score because that’s not in his DNA — his game will be to control the midfield. But, the holding midfield position is often the most under-appreciated spot in soccer. Even people who follow the game for decades have hard time quantifying the importance of a general. And you’d wonder, even if Toronto signed a noted MLS midfield commodity like a Kyle Beckerman or an Osvaldo Alonso, if there would all of a sudden come a pressure to score goals.

Possession and balls won will be Laba’s keys for TFC. The finishing will need to come from somewhere else.