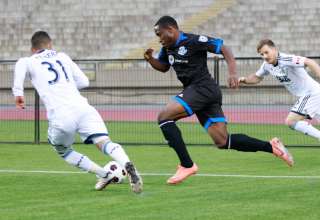 Miller was sent off for abusing the officials after referee Silviu Petrescu made a controversial penalty decision, allowing Camilo to tie the first leg of the Amway Canadian Championship semifinal, 2-2. Then, as Miller was making the long walk down the Commonwealth Stadium tunnel, he could only hear the groans from most of the 2,838 in attendance as Tom Heinemann, in the process of falling down, banged in a rebound to give the Whitecaps the 3-2 advantage heading home to BC Place.

After going down to a disputed goal in the fourth minute, the NASL Eddies roared back with goals from Michael Cox and Chris Nurse to take a 2-1 lead at halftime. And only a fantastic face save by Whitecaps keeper Brad Knighton kept the Eddies from going up 3-1. But the Whitecaps pushed forward in the second half — but still couldn’t find the equalizer, raising hopes for a Cinderella story in this year’s cup.

But, with 10 minutes left in the game, Camilo went down in the box, feeling a touch from the boots of FCE defender Mallan Roberts, who was making his professional debut. Petrescu pointed to the spot. With Camilo already on a yellow, had Petrescu called a dive, the Brazilian might have been sent off. Instead, he finished the PK and the Cinderella story turned into A Nightmare on Elm Street for the home fans.

“The man’s known around his league for being a little bit of a leapfrogger,” said Roberts after the match. “But, from what I saw, I can say he’s a true professional.”

Miller collected himself before making his post-game speech, and was politically correct in his comments, saying that he’d need to see the replays before commenting on the call again.

Miller also wouldn’t discuss Camilo’s fourth-minute goal, a low roller of a free kick that skidded across the box and inside the far post. But, as the ball went through the box, it appeared that Darren Mattocks, in an offside position, made a motion that he was going to play the ball. But the linesman kept the flag down, indicating he didn’t feel Mattocks was active.

“”I am not sure if he was offside,” said keeper Lance Parker. “But when he made that little flinch like he was going to take the shot, it kinda froze me, it kept me from diving to my left.”

“If it was offside, I haven’t seen it. I can’t say,” Miller said. “But the ball’s travelled a long way, I’ve seen it a million times on TV and I’ve played in games that the ball travels a long way and you think that someone’s going to get a touch on it, the defender’s going to get a touch on it, and the ball’s in the back of the net. But, boy, the way we responded to that was magnificent.”

FCE came back, with a vengeance. Left back Lance Laing, who was the best Eddie on the pitch Wednesday, played a long ball to the box. Whitecap Andy O’Brien got his head to it, but could only pop the ball in the air. Eddies striker Michael Cox got the second touch, and his touch-header lobbed over Knighton and inside the post.

The Eddies kept coming – and in the 27th minute, Chris Nurse nodded home a corner.

“It was strange,” said Whitecaps’ coach Martin Rennie. “We got off to a great start and then, almost right away, we give up a goal.”

Laing then set up the Fordyce chance, which Knighton blocked.

“That delivery he had into Michael Cox for the first goal, that’s something we’ve acually worked on in training, and it’s pleasing to see that come through. He has real good qualities going forward. His free kicks, his crossing is fabulous.”

But the Whitecaps got the last laughs.

“I thought, in the second half, we played very well, we put them under a lot of pressure,” said Rennie.

“I can’t ask any more of the players,” said Miller. “They were magnificent all over the park. We finished the game with a 17-year-old Canadian (Sadi Jalali), a 19-year-old Canadian (Edem Mortotsi) and we gave a 20-year-old (Roberts) his professional debut.”