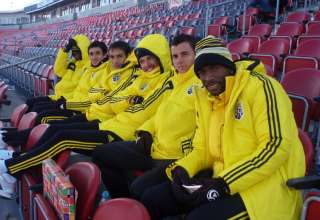 Toronto FC has very little margin for error.  For a team that’s struggling to both consistently defend and, increasingly, struggling to score goals, one mistake is all it takes to waste a strong performance.  Such was the case on Saturday, when TFC largely outplayed the Columbus Crew but came up on the wrong end of a 1-0 result at BMO Field.

The key moment of the game occurred in the 56th minute, when a Toronto surge quickly became a counter-attack after a Julian de Guzman turnover at midfield.  Columbus midfielder Bernardo Anor was the point man for a give-and-go series of passes and was in position in front of TFC’s net for a cross.  Reds centre back Logan Emory was in position to cut the ball off but his clearance attempt went right to Anor, who fired it in for the goal.

It was a tough error for Emory, made doubly worse since he had delivered a strong performance up to that moment.  Toronto’s back line has already been thinned by injuries and international absences so, with Miguel Aceval nursing a bad hamstring, Emory — who played with the NASL’s Puerto Rico Islanders in 2011 — got the opportunity for his second start.

Emory left before speaking to reporters, but his teammates were quick to point the finger at the team’s overall failure to capitalize as the reason for the defeat.

“Logan filled in today and played a great game.  Anyone else who steps in needs to show that same kind of intensity,” said defender Ashtone Morgan.  “It was hard luck today.  The passion, the fight, everything was there but we just couldn’t get it into the net….Unfortunately they were the first guys to score the goal and see the rest of the game out.  We controlled the game but just couldn’t score.”

The loss drops the Reds to three losses in the three games in league play and the club has scored just one goal thus far in MLS competition.  This scoring prowess was on display Saturday as Toronto kept the pressure on the Crew, especially in the second half, but couldn’t find that final touch to cap off some deft passing in Columbus’ end of the field.  TFC managed 14 shots in the match, with just three on target.

Toronto head coach Aron Winter said he wasn’t worried about his club’s lack of scoring, as he believes the goals will come as long as the team is consistently getting themselves at least in position to score.

“I think we’ve played very well, created a lot of chances…I think that the way we played, we lacked a little bit of sharpness,” Winter said.  “When you create six to 12 chances, it’s luck [at that point]…The only difference is we have to be sharper.”

Forward Danny Koevermans, who led TFC with four shots in the game, didn’t quite agree with his coach’s description of the team’s problem.

“[Sharpness] is a simple word. Like now, we don’t score, we’re not sharp,” Koevermans said. “That’s not the thing… Maybe if it’s a block and it goes over the keeper, deflected, then it’s sharpness. It’s just unlucky today. Worst-case scenario, we didn’t deserve this loss, but we have to keep our heads up.”

Penalty Save
There wasn’t much action to speak of from either side in the first half, save a Columbus penalty kick in the 41st minute that was saved by TFC’s Milos Kocic.  The penalty was awarded on a controversial call, as it appeared Toronto defender Ty Harden barely (if at all) touched Crew striker Olman Vargas, as Vargas fell just on the edge of the box.  Still, it ended up being a moot point as Kocic guessed correctly and dove to block Milos Mirosevic’s shot.

The Reds began to pour on the pressure in the early minutes of the second half and, even after Anor’s goal, kept pressing.  TFC was able to consistently link up on passes along the ground, which Kocic felt was a tactic his team should’ve used more of in the match.

With this frustrating result in mind, the Reds now head to Torreon for the second leg of their CONCACAF Champions League semi-final against Santos Laguna.  With Laguna holding the away-goal tiebreaker, TFC will need to score at least once on Wednesday, and realistically multiple times given that Los Guerreros have dominated CCL competition on their home pitch.

If goals weren’t already hard enough to come by for Toronto, Koevermans will miss the game in Mexico due to a suspension for yellow-card accumulation.  Winter said Aceval will make the trip to Torreon but didn’t say whether he thought his defender would be fit in four days’ time.

Needless to say, a triumph over Laguna would be not only the biggest result in TFC history, but also one of the bigger upsets of the entire soccer year.  It would be a stunning achievement for the Reds in the wake of their winless record in MLS but maybe for those who believe in the law of averages will think Toronto is due for some good fortune after the tough Columbus loss.

“We’ve played three games in the league and we’ve gotten zero points,” Winter said.  “In all the games we’ve played well and that’s the big difference.