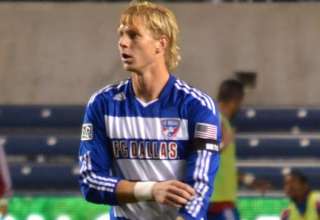 The rebuilding process isn’t over yet. The new-look Toronto FC didn’t find instant success as Brek Shea’s rocket of a goal in the 48th minute proved the difference in a 1-0 result for FC Dallas on Wednesday at BMO Field.

It was a game that the Hoops dominated on the stat sheet (a 17-9 edge in shots on goal) and surely deserved to win, but the Reds were probably due at least one goal for their effort. TFC came close on several occasions, including three great opportunities in the closing minutes, but in the end the club suffered its third straight clean sheet loss.

“We deserved better but that’s football,” said Toronto head coach Aron Winter. “The most important thing is that we had a lot of opportunities in the game and at some in the game we were playing well.”

TFC also dropped the reverse fixture to Dallas on May 5 at Pizza Hut Park but the Reds that lost that game were almost literally a different team than the Starting XI that took the field on Wednesday. Five of Toronto’s seven transfer window acquisitions (Torsten Frings, Andy Iro, Ryan Johnson, Danny Koevermans and Eddy Viator) made their TFC debuts in the Starting XI, while other newcomers Leandre Griffit and Terry Dunfield didn’t dress due to minor injuries.

Unsurprisingly, the new lineup didn’t immediately gel. Toronto looked a bit tentative in the first half but slowly began to gain some attacking momentum as the match progressed. TFC actually outshot Dallas in terms of shots on goal (6-4) but couldn’t find the equalizer to salvage a point from the game.

“It took a little bit of time, probably not until the middle of the first half we started to knock the ball around and really know where we wanted the ball or things like that,” Johnson said. “It’s going to take time but hopefully it won’t take too long. I want to start winning games as soon as possible and that’s our goal.”

After a scoreless first half, the Hoops opened the scoring in the 48th minute. Midfielder Shea took advantage of a Mikael Yourassowsky turnover at midfield and raced unencumbered down the field. From about 25 yards away from the net, Shea fired a fantastic strike that found the upper left corner and left goalkeeper Stefan Frei with no chance.

The goal was Shea’s ninth of the season, tying him with Landon Donovan and Thierry Henry for the league lead (temporarily; Henry scored his 10th later in the evening, a consolation goal as the Red Bulls lost to Colorado by a 4-1 count) and also making him the early favourite for the MLS Goal Of The Week.

“We lost on a wonder strike by Shea,” Johnson said. “He’s a great player and that was a great shot…I’d rather lose on a goal like that than on some kind of mistake. We created chances that we didn’t put away but we fought hard and didn’t give up.”

Indeed, TFC looked like it had tied the game just five minutes later on a close-range shot from Joao Plata but the goal was (correctly) called offside. The Reds kept coming, with Winter substituting forwards Maicon Santos and Nick Soolsma to try and generate as much offense as possible.

It was FC Dallas, however, who took control for much of the next several minutes, coming close to doubling their lead. Iro stopped a Marvin Chavez rebound off of another shot from Shea in the 60th minute, then Brazilian defender Jackson nearly scored on a chip shot that bounced off the crossbar.

Substitute Bruno Guarda had perhaps the best opportunity of the match in the 72nd minute. A non-call on a seemingly obvious Hoops foul on TFC’s Ty Harden led to a 3-on-1 challenge in the Toronto end. The ball ended up on the foot of a wide-open Guarda but he somehow missed an easy conversion.

Just when you thought Lady Luck might be on TFC’s side, however, referee Hilario Grajeda brought the Reds back to earth. Johnson was taken down in the FCD box in the 78th minute, a play that should’ve and could’ve been called a foul. The official let play continue, however, leaving Toronto once again snake-bitten by a call against the Hoops. On May 11, Daniel Hernandez scored on a penalty kick to give Dallas the win over TFC after a very controversial foul on Adrian Cann.

The Reds weren’t quite finished, getting three quality chances in the match’s final minutes. Santos missed a header in the box in the 87th minute, Koevermans couldn’t get a solid foot on a cross despite being inches from the goal line in the 90th minute and during stoppage time, Frings was awarded a free kick from 23 yards that he sent sailing well over the net.

“It’s the first time that we’ve played with a lot of new guys,” Winter said. “If you saw all the opportunities that we had on the pitch it’s a pity we didn’t make at least one of those chances.”

The five new players all acquitted themselves well in the game but the most attention went to Koevermans and Frings, the two Designated Players. The two combined for five shots, four of which were on goal, and Frings in particular took out as a general in the defensive midfield role.

“We have a young team that I want to show them leadership,” Frings said through an interpreter. “I want to give them some confidence and motivation because we’re kind of on a losing streak right now.

“I feel that we played equally but unluckily we lost to a beautiful goal. It was difficult because the team has only played together for one practice, but it will come.”

The bright side for TFC is that the newcomers will get plenty of time together given the club’s busy schedule. Wednesday’s match was the first of six games for Toronto over an 18-day span, a bit of fixture congestion caused by the two-legged qualifier with Real Esteli for a spot in the CONCACAF Champions League.

Should Toronto qualify for the CCL group stage, they may have two more dates with FC Dallas, who also have the chance to qualify for Group C play. The Reds play in Kansas City on Saturday before returning home to host Real Esteli on July 27.

Of course, trying to incorporate so many new players during this important time of TFC’s season could result in the club not meshing in time to get back to the Champions League proper.

“It’s almost like having a preseason in the middle of the season,” said midfielder Nathan Sturgis. “It’s a new team and you have to restart that process of guys getting used to playing with each other….We’ve got to try to make that process as fast as possible.”