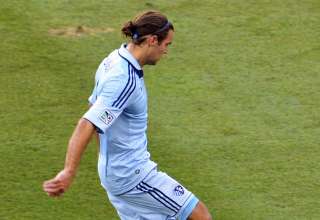 After playing Sporting Kansas City to a scoreless tie in its second-last home game, one that saw head coach Jesse Marsch flood the pitch with offensive players on the hopes of burying the ball in the mesh, the Montreal Impact is not mathematically out of the playoff picture but hopes are rapidly disappearing over the horizon.

“I wasn’t a math major in college,“ said Marsch when asked what the draw meant with regard to his team’s postseason aspirations. “So I’m not sure. It starts to feel as if the points are working against us. We have to keep an eye on the results around the league. We know we’re on the outside looking in. It’s not a great situation for us but we’re not stopping. As long as there’s a little bit of light at the end of the tunnel this team is going to give it everything it’s got just like it has every day all season long. For sure we’re not stopping now.”

Neither side soiled the score sheet in an opening half that began under a weak drizzle, the first rain to fall on the Impact at home this season. After an initial 10 minutes of play that saw both sides exhibit tentative play with neither posting a major scoring threat to the other, the pace picked up as the clouds stopped dropping moisture — with the visiting team controlling the bulk of the play and getting the better chances at putting goals on the board.

Montreal midfielder Justin Mapp, recently returned from injury, took control of the ball just north of his penalty area in the 11th minute and weaved through traffic towards the Kansas City goal. The only white spot in a sea of dark blue, he was hauled down just short of the box to the great dismay of the majority of the declared 20,521 fans in attendance.

Sporting Kansas City had its first kick at the can a minute later, a Graham Zusi shot from the corner of the 18 metre box that curved around the far post. In the 14th, the visitors threatened again, this time from the edge of the goalkeeper’s box as Kei Kamara’s drive buried itself in Troy Perkins’ midriff.

The Impact had a chance on a set play in the 25th minute. Marco Di Vaio found Mapp but the midfielder’s shot was short of the near post, rolling harmlessly away from Jimmy Nielsen. The SKC goalkeeper was called upon to make the only save of the opening 45 in the 29th minute of play, diving to his left to thwart a Felipe shot set up by backliner Hassoun Camara, named the Impact Player of the Game.

The opening half ended on a Kansas City chance as defender Lawrence Olum was awarded a free kick, sending the ball high and to the left of Perkins’ net.

Upping the ante to begin a second half that featured a lot more robust play than did the opener, Montreal substituted Andrew Wenger for Justin Mapp and sent Sanna Nyassi in to replace Alessandro Nesta in the 57th. Overloaded up top, the Impact came close in the 59th minute when Wenger headed the ball goalward only to have it come to rest atop the mesh.

Montreal’s offensive additions required some of the players on the pitch to relocate. Captain Davy Arnaud fell back to the right side of the backline while Camara moved over to the centre to fill in for Nesta.

In the 68th minute, Arnaud rolled the ball across the face of the net and wide. Ten minutes later forward Marco Di Vaio was awarded a corner and put the shot on target, only to have Nielsen bat it away with one hand. Seconds afterwards Nyassi had control of the ball on the goalmouth, posing a threat that required the combined efforts of Nielsen and an onrushing Seth Sinovic to thwart the Gambian challenger, with more than a few in the stands getting the impression that the Kansas City defender committed a hand-ball offence.

As added time ticked away Montreal kept pressing. Awarded a free kick from 35 yards out, Di Vaio found Matteo Ferrari in front of the net but the veteran Italian defender was unable to convert. At the final whistle Montreal was still threatening the SKC goal, with an unmet Nyassi cross serving as the last play of the game.

“I think the effort overall from the guys in the second half was very good,” offered Marsch. “The way the game was going in the last 10 or 15 minutes I thought we had a chance to get a goal and get three points.”

Asked for his reaction to the result, midfielder Patrice Bernier admitted to being less than delighted.

“We’re a little disappointed because we had four games to play and we knew we had to win them all to have a chance at the playoffs. We didn’t have the same energy in the first half as we did in the second and you can’t play that way against a team that knows exactly what it has to do and then goes out and does it. We came up with too little too late and now we have three games left in the season.”

Troy Perkins, who posted his third clean sheet since joining Montreal in the trade that sent Donovan Ricketts to Portland, also felt that the Impact played a better second half than it did in trhe opening 45 minutes.

“The second half was pretty good for us. We had a lot of chances and put them under pressure,” he said. “The first half we let them dominate and control the ball. They’re a good physical team and they’re very good athletes. We didn’t deal with them too well in the first half but in the second half we came out and made them defend.”

Montreal has yet another week off before meeting the Dynamo in Houston on Oct. 6.

THROW-INS: Sporting Kansas City midfielder, Julio Cesar, made his 50th MLS appearance this afternoon. Defender Matt Besler is only a game away from the century mark.
Going into today’s action SKC’s Iron Man was goalkeeper and captain, Jimmy Neilsen, at his post for every one of the 2,610 minutes his team has played this season. Montreal’s Felipe leads all Impact players with 2,562 minutes on the pitch.

• When the sun rose this morning SKC was leading the league with 483 shots and were also the stingiest team in the league having allowed only 279. Kei Kamara has seven goals in his last 13 games and a career-high 11 so far this season. He leads the team with 123 shots, 46 of them on-target .Graham Zusi leads all MLS players with 14 assists.

• Collen Warner holds the Impact record for most consecutive games played, having appeared in his club’s last 21 outings. His string will be interrupted by a suspension for the Houston game for accumulating five yellow cards,