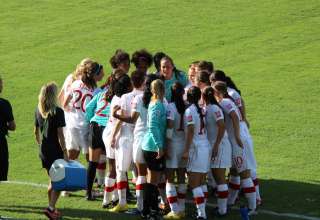 Nigeria got the late equalizer, but it should be Canada who feels fortunate to escape its opening match of the U-17 Women’s World Cup with a draw.

Chinwendu Ihezuo was left open in the box to volley home an 81st-minute equalizer as Nigeria drew Canada 1-1 in their Azerbaijan opener. But, in fairness, the game should have been a blowout win for the girls in green, who spurned chance after chance after chance.

Nigeria outshot Canada by a 27-8 margin. Before the halftime break — which saw the teams go into the break at 0-0, the Nigerians smacked shots off the woodwork three times.And the best of those three chances, from Chidinma Edeji, wasn’t a case of bad luck — it was a miss, plain and simple. She was only a couple of yards from goal, had Canadian keeper Kailen Sheridan at her mercy, and smashed the shot off the woodwork when it looked as if it would be impossible to miss the net.

In the second half, thought, it looked as if Nigeria may give up all three points because of its wastefulness; Canada came at the Nigerians on the counter, and two defenders backed off Amandine Pierre-Louis, who took the time and space given to her and blasted a shot into the roof of the net.

But Canada couldn’t survive the onslaught — and Nigeria at least got a point.