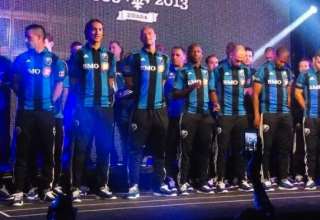 Wednesday night the Montreal Impact hosted an invitation-only soiree at New City Gas, one of this town’s newer hipster hangouts. It treated its guests to snacks and a couple drinks, introduced this year’s edition of the team and kicked off the club’s 20th anniversary by officially unveiling the commemorative jersey the team will be sporting this season.

Thursday morning, the team invited media and fans to leave its practice.

“This was not a matter of a lack of respect for you but there are certain things I would like to do with the team in private,” head coach Marco Schallibaum said after the workout.

“There were a few surprises I wanted to prepare for Saturday. If you’ve been around the team regularly, you know how we play but I would like to have a half hour or so each week with only the players and coaches,” he said.

“In my opinion, they’re ready,” was his reply as to whether he felt his side was ready to undertake the 2013 campaign.

“But the preseason and the championship are different,” he cautioned.

“We’ll be playing one of the best teams in MLS (Seattle) and there’ll be 50,000 people cheering against us but we’ve done everything we can. We showed during the matches in Florida that we were a good team but Saturday is another story.”

Three Impact players are sidelined by injury and will not be heading west (defender Nelson Rivas, midfielders Sinisa Ubiparipovic and Maxim Tissot) while four others will not be among the 18 dressed against Seattle on Saturday.

“There were choices that had to be made. There are 22 available and we ‘eliminated’ four,” said Schallibaum, verbally indicating the quotation marks. ”Blake Smith will not be making the trip with us. Neither will the two youngsters, Wandrille (Lefevre) and Karl (Ouimette). And the fourth is (Zarek) Valentin.”

“It’s not a vote against them. They’re not happy that they’re staying home. At least I hope they aren’t, but there are choices that had to be made,” the Impact gaffer clarified. “It’s not because they’re not as good as the others because all 22 are more or less at the same level but we can only take 18. I can’t take Karl and Zarek, three or four defenders and only have room for two attacking midfielders. There has to be a mix. They are professionals and they know that these things happen. It’s a long season and everyone has to be ready all the time, not just the 18 who are going to be on the bench.”

Playing against the Sounders will give the Impact an idea of what it might have been like for the teams visiting during its better-attended Olympic Stadium games last season. Schallibaum figures the Seattle crowd will let him know how his boys fared in their opening match.

“They’re one of the best teams and very strong offensively but they’ll be without (midfielder Osvaldo) Alonso, due to a red card in the playoffs last year. That’s good news for us because he’s a good player but it means that someone else will be in his spot and we have to be ready for him. Our objective is to make the crowd whistle. If the 50,000 spectators whistle, we’ll know that we’ve done our job well.”

A number of players also made brief post-practice appearances, abbreviated by the team’s afternoon flight reservations.

Troy Perkins, given the nod as the Impact’s first goalkeeper earlier this week, was grateful for the show of confidence on the part of Schallibaum.

“Yes,“ he said, “especially with a new manager because, you never know, he may have his own ideas and you may not fit into his plans. For him to stand behind me was a boost.”

“Personally I always expect it,” Perkins offered. “That’s the way you have to train and Evan (Bush) has the same mentality. I think, collectively, we probably have the best working group in the league and both of us could start at any point.

“It’s tough for a goalkeeper. Plays come a lot quicker there, especially if it’s raining,” he said about the challenges faced playing on Seattle’s Century Link Field.
“It’s a tough field to play on but it’s also a great place to play. The fans are constantly on you. I’ve got some good memories there.”

This is the second First Kick with Montreal for midfielder Justin Mapp, who still feels the excitement leading up to the season opener as intensely as he did in his rookie campaign a decade ago.

“It’s a good group of guys. With another year we’re more familiar with each other. I think everybody is ready to fight for one another and there are no divisions on the team or anything. That’s a sign of a strong team, sticking together,” he said.

“We didn’t have a very good road record and we started the season pretty bad,” he recalled when asked about this season’s team as compared to the 2012 edition.
“It’s never easy to win on the road but if we can go into places like Seattle and Portland and get results, whether it’s one or three points, that’s a sign of good things to come. If we can get some points on the road there it can only help us because I know we’ll be a strong team at home. It won’t be easy but I think we have a team that’s capable of getting some results there.”

Among the tactical changes that came with the arrival of Marco Schallibaum is that Montreal will, in the initial stages of the season at least, be playing a 4-1-4-1 formation.

“It changes things a little (for me) because I won’t have someone playing alongside me but there are a lot of players who are familiar with my movements and the task is the same,” said striker Marco Di Vaio. “I think that it will help us in the defensive aspects of the game. We’ll be more compact and by working together it will be more difficult to attack our goal,” he concluded.

Asked about the expectations he has set for himself for the upcoming season, the former Serie A star replied, “To help the team by scoring goals, working hard and make use of my experience. After six months in MLS I know the game and the league better and I think I’ll be able to do much better than last year.”
The Impact brass have made no bones about the fact that, this season, the team MUST play beyond the end of the regular schedule. Asked if he felt they would achieve that goal, Di Vaio replied, “I hope so. That’s what we’ve been working towards for the past weeks. It’s the same team as last year and we know each other better. I think we can achieve something important and I also think that if there are some missing pieces that the club will do something to help us get into the playoffs because that’s everyone’s common objective, the team, the players and the coaches.”

ABOUT LAST NIGHT
The 20th anniversary jersey unveiled publicly for the first time, and modeled by the Impact players when they were introduced, evokes the 1993 inaugural team’s polo-collared kit, with alternating vertical deep blue and black bars. Goalkeepers will be sporting round collared jerseys in powder blue with a contrasting black shoulder.

Also introduced, wearing reproductions of the original team unis, were the bulk of the players from the 1993 Impact squad, among them present day of soccer broadcasters Lloyd Barker, Jason DeVos and Grant Needham.