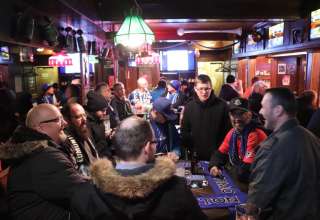 (Ed. note: Below is an open letter from FC Edmonton General Manager Jay Ball. FCE, after playing in NASL from 2011-17, is not running a professional program this season. But ownership remains in talks with the coming-in-2019 Canadian Premier League. CanPL President Paul Beirne was in Edmonton this past week to learn more about the Alberta capital and the YEG4CPL movement; that’s a supporters-driven initiative to raise the profile of soccer and FCE in the city.)

This past week was a reminder of just how I much like a comeback. I love those stories, the movies with the classic David vs. Goliath plot. I love the underdog. I relate to the underdog. In many ways, I am one. I  went through many challenges growing up. Some of you know my story. I overcame a great deal. Over and over, the two great teachers, failure and success, taught me the power of resilience and how to be resourceful. I’ve applied those lessons my entire life.

I’ve used a lot of that resilient and resourceful thinking since I came to the club almost two years ago. I’ve been very fortunate. Our owners, Tom and Dave Fath, have allowed me to bring in new ideas and approaches. However, If someone had told me that, within my first two years, I would take over a struggling front office, spend two seasons trying so hard to take it to the next level, then shut it it down and, just a few months later, be faced with possibility of  try to launching it all over again, I would never have believed them.

It’s been quite the ride.

However, the truth is, through it all, I couldn’t help but be excited by every twist and turn. Every success and every mistake, to me, was just another excuse to learn and get back at it the very next day. I can’t explain it, that’s just how my brain works.

When people ask me what I like about my job, I say things like, “I’m living my dream” or “I love the challenge.” But, truth is, I really could never find the words to say just what connects me to this whole soccer experience. It’s no secret, I wasn’t a “football guy.” In fact, very early in my tenure with the club I once tweeted this out prior to a match: “Come on fans, we need you to be the 11th man!” Yes. I was pretty much the village idiot when it came to the game itself.

So what is it about this game that draws me in? What is it for me?

I found out last Friday night, during our supporters’ summit at a local pub. For me, it’s actually not really about the challenge. When asked what he loved about the game, Canadian Premier League President Paul Beirne said “It’s not just the game that I fell in love with, for me, it’s more about the culture, it’s the people and how the game brings the community together.”

Boom. That hit me hard. That comment validated why I do what I do, what excites me about this club, this game and our future together. For me, it’s about the community. And this community, is like nothing with which I have ever been involved. Nothing even comes close.

For a guy who thought he knew a lot about resilience, the YEG4CPL community has taught me more in the past 30 days than I ever could have imagined.

They have created a movement with passion and drive, rooted in supporters’ culture and community. They’ve sent a message to this city that we’re simply not bringing back a football club, we’re building a community and stoking the fire of the world’s greatest sport culture right here in Edmonton.

I’ve learned once again, in a more powerful way, the power of the underdogs. The giant killers. I’ve learned from them that is there’s is nothing more satisfying than the prospect of beating the odds and rebounding in spite of all the naysayers and negative influences.

Because of YEG4CPL, I’ve learned all over again: The greatest victories come from hard-fought battles,  but they are worth fighting if you have a cause and a mission. YEG4CPL reminded me that movements are made up of moments (like their pub nights… every Friday night), symbols (like the Rally Rabbit) and people. All of them with clear missions. From YEG4CPL, I’ve learned that no fan culture is like football supporters’ culture. Nothing comes close. Not hockey. Not pointy ball. Nothing. YEG4CPL has taught me once again to never give up and turn over every stone because what we are all doing is important.

So to YEG4CPL I say this. This time, everything is different because you have changed the game. You’re stronger than any other fan base in this city. You have a mission that is crystal clear (nothing drives people like a mission). Because of your efforts, solid progress has been made. In the past four weeks alone, your efforts have resulted in more individual memberships/deposits for the 2019 CPL season than we had all of last season. Think about that. That happened in only 30 days.

If we continue to do the right things and build our community, I believe FC Edmonton comes back with a vengeance. You believe that, too. I know you do. No doubt, skeptics are everywhere. But together, in spite what anyone says, we will build it again. Together we will rise. We will win. For you. For the Faths. For the future of our academy prospects and entire community. Slowly but surely, I see YEG4CPL movement turning into an army of supporters inspired by its members and driven by the culture that brings us all together.

And, as I watch that happen, I promise I will do everything in my power to ensure our home ground Clarke Stadium is turned into a fortress. Because for our army, nothing less than a fortress will do.

Thank you to YEG4CPL for reminding me about the power of resilience. And never giving up. The MARCH2CPL continues and we are just getting started..