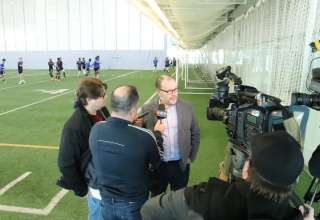 Paul Beirne meets with the media during his Edmonton tour.

People file into the Soccer Centre lounge, coming out of the cold. It’s late March Thursday night in Edmonton, but a strong wind carries the warning of a late-season snowstorm to come.

For Paul Beirne, the scene is both strange and familiar; he’s standing in the midst of 100 soccer supporters, in a lounge that overlooks indoor soccer fields. The windows offers views of the games and tryouts occurring in the four fields below.

Yes, this is a soccer culture, but in Edmonton’s South Centre, it isn’t like the soccer culture what Beirne knows from his Toronto home base. Here in Edmonton, the fields are ringed by boards; he is in a place where the old turf-and-boards outdoor game hasn’t been supplanted by futsal. At one point, he wonders out loud why, in a large facility such as this, they don’t just have a large, covered, regulation field.

This is the challenge for Beirne; the president of the nascent Canadian Premier League is in the process of touring the country, learning more about each of the potential markets. But he sees that soccer culture in Canada isn’t homogenous; each city that could be part of the CanPL’s debut 2019 season offers something a little different.

Beirne helped build Toronto FC. He helped birth a new generation of soccer fans in the GTA;  he still remains loyal to the club as a season ticket holder. The day before this town hall, he tells me so proud to see familiar faces from year one still in the supporters’ sections at BMO Field, but now they’re bringing their kids. They are passing on the soccer culture.

But that MLS culture is a homogenous culture. One company makes the jerseys for all the teams. It has developed a culture where people not only support their teams, but “cheer for the league.” That is, the perception of the league as a whole is vitally important to them. And, of course, in MLS, contracts are controlled by league headquarters.

Now, Beirne is working to build and sell a league that will be owner driven, that will stress team independence.

He tells the audience that he does not want the Canadian Premier League to be compared to MLS. He says the league is leaning towards determining a champion via the single table and not having playoffs.  He says, “where possible,” the Canadian league will respect the FIFA dates, something MLS has long been criticized for not doing. When an audience member asks him if an MLS reserve team would ever be admitted into the CanPL, he smiles and says “yes, when we have a second division.” But never the first.

Beirne says, instead of MLS, the closest comparison for CanPL will come to pro leagues in South Korea and Japan. Why? Because they are relatively new, and are examples of first divisions that were basically “plopped on” to those countries pyramids in order to kickstart development. Those leagues lean heavily towards playing domestic players.

Beirne can say all he needs to say about not wanting CanPL to be compared to MLS. But he knows, like we all do, that deep down, MLS vs. CanPL will not go away anytime soon. There are three Canadian teams in MLS. MLS games are on Canadian national TV. And, of course, American fans will look at neighbouring Canada as it begins to unravel itself from the U.S. soccer system. They will ask: “If Canada can have single-table, why can’t we?” And we know the fervent anti-MLS factions that exists in the U.S. will use Canada as an example as they continue to fuel their self-destructive Soccer Warz.

And, despite Beirne’s claims that CanPL shouldn’t be compared to MLS, he regularly pokes the bear. Why? He is with his people; a group of soccer supporters and minor-soccer parents and coaches who want to see the game advance in Edmonton. Many have been working for months to raise the awareness of FC Edmonton, hoping to see the former NASL team rise from the ashes and re-emerge as a CanPL power.

When the recorders are on and the notepads are open, Beirne is measured to the point of frustration. He makes it clear the league is making slow, steady progress towards its launch date. He’s measured to the point of frustration.  You can’t blame him; he has to vet potential investors and researching the cities where they want to place teams. Stadium deals are in various stages of preparedness. He’s juggling so many things at once, as rumours circle him like sharks.

But, put him in a room of supporters, put him amongst the soccer tribes and supporters groups, and a new Beirne emerges.

“Our goal is to be as big as MLS,” Beirne says.

And Beirne doubles down, he qualifies the comment as a joke, but it’s clear he’s making a point. “No Canadian Premier League team will ever have a reserve team in Fresno.”

Beirne is not a yeller or a screamer. He doesn’t go up to a podium and pound his fist. He’s approachable, quietly charming. So, when he amps up the rhetoric, it hits you right in the feels. It’s like the coach who never ever yells who finally decides to toss a garbage can during a halftime talk. It holds your attention. You say, “whoa.”

“The CanPL will do more for soccer in Canada in 10 years than MLS has done for U.S. soccer in 20,” Beirne says.

When asked if he could ever see the three Canadian MLS teams defecting for the Canadian League, he answers, “it’s a possibility, but we have to earn it.” Basically, the CanPL will have to prove it’s a good enough league that the three Canadian MLS teams will one day want to leave that league on their own terms. He doesn’t want teams forced to leave MLS or legislated to act a certain way.

But the message is clear. One day, he believes CanPL will be on solid enough ground that someone at Maple Leaf Sports and Entertainment might actually wonder if it will be better for Toronto FC to be playing in an exclusively Canadian circuit and forego the games against the likes of the Chicago Fire and the two New York teams.

This Thursday night, in the province of Bible Bill Aberhart, Beirne is practising a new way of big-tent evangelism. It’s not about baptism or Social Credit politics. It’s about a religion that mixes soccer with what Beirne calls the “most powerful brand of all,” the Canadian maple leaf.

And it’s coming to a city near you.