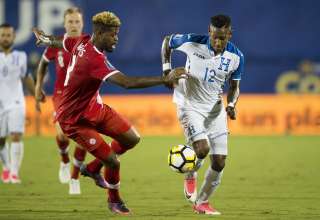 Heading into the 2017 Gold Cup, the likely prognostication for Canada would have been to finish in third place and hope that’s enough to get to the knockout round.

A second-place finish in Group A to go with a no-fear sort of performance against both Costa Rica and Honduras will continue to stoke the still small hope that Canada is, indeed, heading in the right direction under head coach Octavio Zambrano.

“It’s a mentality shift for Canada. This is our first step,” said midfielder Patrice Bernier, who continues to provide stable leadership while putting in quality performances with a young group of players. “It’s one objective obtained and now the mission continues.”

After Friday’s 0-0 draw with Honduras in Frisco, Tex., for the first time in a very long time, Canada knows that not only it has advanced to the knockout round of the Gold Cup, but it plays the waiting game to see who it faces. It will face the runner-up in Group C, which is likely to be Jamaica or El Salvador.

That also means there could be roster changes coming with Canada able to swap up to six players from its extended roster and there are some tough decisions to be made.

There have been plenty of good performances to go around so with Cyle Larin as one example of an available attacking player, does his inclusion mess with the chemistry that has been established?

“I think I’m going to have to talk to my pillow tonight about that,” said head coach Octavio Zambrano, drawing laughs from the press conference room. “I don’t want to make that decision tonight. I have to assess a few things, look at the video, see what’s in front of us. We do have players that could come and contribute and other national teams are going to do it.”

The scoreless draw with Honduras also showed a changing versatility to the Canadian squad. Zambrano showed continued faith in Samuel Adekugbe at left back and Michael Petrasso at right back while moving Marcel de Jong into a more advanced role.

That move nearly paid off when de Jong nearly volleyed in Junior Hoilett’s flicked-on cross just past the 20-minute mark.

De Jong also had a well-struck attempt with his right foot in the final moments. He had been used in an attacking role before for Sporting KC and had been an option under Benito Floro but for a lack of other options at left back.

With Adekugbe now seemingly gaining confidence, there are more options and Zambrano has a pleasant headache in dealing with player selection.

“If we play like we have played up until now, I think we are onto something,” said Zambrano. “How much it is, we don’t know yet but I’m willing to bet for something.”

For one night, Canadian men’s soccer fans can enjoy tangible evidence that there is progress—advancement to somewhere that it hasn’t been for eight years.

And while there is still a lot of work to do and a long way to go, this result against Honduras and a quarterfinal berth in Glendale, Ariz., is something to celebrate.