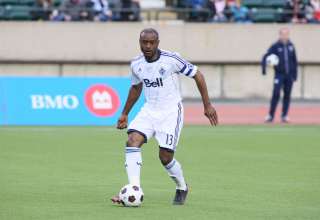 Small moments change matches, and while Darren Mattocks looked set to be the hero on Saturday after a cracking first-half effort, his second-half miss will be the lasting memory from a 2-1 defeat against the Houston Dynamo at BBVA Compass Stadium.

With his team leading 1-0 in the 53rd minute, the Jamaican youngster elected to shoot at Tally Hall from a tight angle rather than pass to a wide open Nigel Reo-Coker and a streaking Erik Hurtado.

Just two minutes later, the Dynamo equalized through a wonderful bit of interplay culminating in a Giles Barnes headed goal, and on 62 minutes Warren Creavalle scored the deciding effort by pouncing on a loose ball in the area.

Following the defeat, stand-in captain Reo-Coker highlighted Mattocks’ error, and said he had strong words for the 22 year old following the match.

“I said to Darren after the game, ‘with the level we’re at now, those are the small margins that we can’t let pass us by,’” Reo-Coker told Vancouver radio station TEAM 1410 following the match. “We take our second chance, the game’s 2-0, it would have been very difficult for them to come back being 2-0 down at home with the [32-game home unbeaten streak] they had.

“That’s the difference between being playing a higher level of football and a lower level of football. You take your chances. You might only get once chance away from home and you must learn to take that one chance that you may get.”

The Englishman stressed that his criticism was “constructive” and wasn’t meant to single Mattocks out, but his comments certainly contrast with the majority of Major League Soccer players, who generally opt out of calling teammates out publicly.

“To become better players, they have to be able to accept criticism,” Reo-Coker stressed when discussing the team’s younger players. “It’s a constructive criticism. That’s the difference between winning games, whether it’s playing in MLS or playing in the [English] Premier League. I’ve played the game for many years now and I’ve been in many situations like this and most managers and people will say that — goals change games.”

The result was a bit of a cruel conclusion for Mattocks, who scored a terrific first-half goal on 36 minutes by turning Eric Brunner, who entered the lineup due to Jermaine Taylor’s international call up, before powering a shot into the top right corner of Hall’s goal.

“It was a massive moment in the game,” head coach Martin Rennie told Vancouver radio station TEAM 1410 when asked about Mattocks’ miss. “In the first half, we stood up to the pressure they put us under, didn’t give up too many chances and then scored an excellent goal. Good assist from Erik [Hurtado] and an excellent finish from Darren.

“At that point, we were in a really good position. Second half, obviously there was more waves of attack coming at us, and we managed to create a great chance on the break… that was a great chance for us to put ourselves in a very strong position. At 2-0, it would have been much more difficult for Houston, so that’s disappointing.”

Fortune also played a part in the Whitecaps defeat, as Camilo hit both posts off a beautifully struck free kick in the 82nd minute which ricocheted off the top right corner of the woodwork before hitting the lower part of the left post and off the line to safety.

“He was really unlucky today not to get that goal,” Rennie said of Camilo’s strike. “Sometimes it’s just not your day.”

The Whitecaps now move on to play Chivas USA next Saturday at the Home Depot Center.