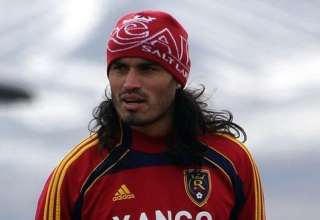 Each team is vying to become the first ever Major League Soccer side to advance to the Champions League semifinals and there was desperation in stoppage time as the injury-riddled Crew pushed to take control of the tie. In the end, a clean sheet was satisfactory for RSL, who was unable to play its fluid brand of soccer but held on despite playing with 10 men — and then nine — for most of the second half.

“The field wasn’t great,” said 24-year-old RSL midfielder and Toronto native Will Johnson. “We weren’t really able to play the way we wanted to. Whenever you’re down a man, you’re going to be happy to take a point and get everyone back on the field to play 11 against 11.

“They (Columbus) are at home. They’ve got to win. We’re a very tough team to beat at home and I know they wanted to win tonight.”

The teams meet again for the decisive second leg at the Rio Tinto Stadium in Salt Lake City next Tuesday at 8 p.m. MT. The side that goes through will face the winner of the upcoming tie between Costa Rica’s Deportivo Saprissa and CD Olimpia of Honduras.

“We’re confident at home,” said Johnson. “We love playing in that stadium. It’s going to be a fantastic night. It’s a great opportunity for our team.”

RSL went down to 10 men early in the second half when defender Tony Beltran was handed his second yellow of the match for a rash challenge on Eddie Gaven. Captain Kyle Beckerman was then given a yellow for dissent. Despite the numerical disadvantage, RSL striker Alvaro Saborio sent a left-footed shot whizzing by keeper Ray Burse’s left post moments later, the best chance of the game to that point for the Group A winners.

Both teams lost personnel in the 72nd minute when RSL defender Nat Borchers was handed a straight red card for a deliberate trip away from the ball on Crew striker Emilio Renteria, who subsequently earned a red of his own for an alleged elbow.

“It was difficult conditions to play a soccer match in,” said RSL manager Jason Kreis. “You take three players off of the pitch, and that also affects the match. “Tonight, it was more of a battle than a soccer game.”

In the aftermath, Columbus produced a good chance, a curling effort from Cole Grossman that RSL keeper Nick Rimando saved before the ball went into the top left corner. Grossman sent a free kick curling into the box in the 80th minute but a foul was called on Columbus to wipe out an apparent goal. Grossman, the Crew’s most dangerous player in the latter part of the match, again threatened late in regular time but a well-hit low ball from 22 yards out was wide of the left post.

The Crew began positively in the opening minute with some quality play in the RSL end, culminating with a good cross into striker Andres Mendoza, who volleyed a ball over the net of Rimando. Emmanuel Ekpo also sailed one over Rimando from outside the area in the fourth minute. Columbus continued to dominate possession and came close to the first goal of the tie in the 19th minute when Renteria fired a low shot that Rimando did well to turn away for a Crew corner.

The visitors had their first decent chance in the 23rd minute, a left-footed strike inside the area from forward Fabian Espindola but, like the Crew attackers, he could not find the target. In the 30th minute, Mendoza picked out Gaven beautifully but the midfielder’s header went harmlessly wide of the left post. Mendoza created another opportunity in the 38th, neatly pulling the ball into a shooting position at the top of the box but his thumping right-footed effort was high. Columbus controlled most of the opening 45 minutes, producing nine shots and three corners. Just three of the Crew’s first-half attempts were on target. The hosts finished with 14 shots to just six for RSL.

“The field conditions, maybe that had something to do with the finishing,” said Crew manager Robert Warzycha. “We can’t be scared to play these guys.”

Columbus (second in Group B with a 4-2-0 record) will need a similar effort in Salt Lake, with better results, to become the first MLS team to make the semifinal round. RSL, Group A winner at 4-1-1, including a 3-1 victory over Cruz Azul in the final group match, has placed a great deal of emphasis on advancing in CONCACAF and is now one win away from a substantial accomplishment.

“I don’t think Columbus gets enough credit for the amount of hard work and dedication they put into this competition but we’ve got no problem telling everybody that this is our main focus, this is our everything,” said Johnson. “It’s been that way since the first day. We took it seriously from the very first game. It’s something that we’ve taken a lot of pride in, put a lot of stock in. “We’ve rested players for big league games in order to give everything in this competition and so far, we’re still in it.”