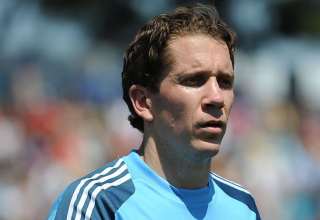 The Montreal Impact has been the class of Major League Soccer’s Eastern Conference in 2013. Fresh off three straight league wins and a two-week hiatus, the Impact seemed poised for a good result in a trip to Crew Stadium in Columbus.

The hosts apparently had different plans. The injury-riddled Crew showed no fear against the Eastern Conference leaders and dominated the play early en route to a surprising 2-0 win over Montreal. Matias Sanchez and Dominic Oduro scored for Columbus to hand Montreal (8-3-2) its first loss since a 2-1 defeat to the New York Red Bulls back on May 8.

Both unorganized and unlucky on defence, the Impact paid a heavy price for its errors in the early going. Montreal was without Italian centre back Alessandro Nesta, who was serving a one-match suspension after receiving a red card in the Impact’s 2-1 win over Sporting Kansas City June 1, and the Crew eagerly tested the visitors’ back line.

“We were second best the first 20 minutes,” said captain Patrice Bernier. “We played with fire. It’s uncharacteristic of our team. Normally, we’re very hard to play against and today, we seemed to be spread out and not be the same team from the last few games.”

Columbus nearly took a lead just 90 seconds in, but Troy Perkins saved captain Federico Higuain’s one-time shot from just outside the six-yard box. Encouraged by the early chance, the tenacious Crew kept on the front foot and was rewarded in the sixth minute as Sanchez scored the first goal of his MLS career, a right-footed strike that caromed off of defender Jeb Brovsky and in behind Perkins, who had already committed to his right.

Montreal had a glorious opportunity to equalize in the 20th as Andrew Wenger, the Impact’s number one pick in the 2013 SuperDraft from Duke University, was sent in alone but his low strike was denied by Columbus goalkeeper, Andy Gruenebaum.

It was a costly miss. Moments later, Montreal midfielder Collen Warner was dispossessed in his own end by the pacy Oduro, who broke in and sent a low shot to the right side of the net for his team-best seventh goal and a shocking 2-0 Columbus lead.

“Every time we’ve come here, this is the type of performance they have at home,” said Bernier. “They come with high press, I think they try and do it early on knowing that they maybe can cause a surprise. And they did. We had the information that this would happen. We just weren’t on our game. Maybe if that first goal doesn’t go in, you maybe go through the storm and get that second breath.”

“I’m a little bit disappointed in the way we came out,” said acting Impact coach Mauro Biello (head coach Marco Schallibaum was serving a ban after he was ejected in the last match at Sporting Kansas City). “We weren’t good. We were very timid, we were second to everything. They showed they wanted a little bit more at that point of the game.”

Wenger had another chance to cut into the lead right before the half-time whistle. He dribbled in from the left flank but his attempt into the top right-hand corner of Gruenebaum’s goal sailed high.

“For a forward, when you’re having difficulty scoring, you have to continue to work hard and continue to do things simple,” Biello said of Wenger, who has one goal on the season. Sometimes goals, they come in bunches. The good thing is that he got in those situations, he created those chances. That’s what positive. Chances come all the time. You just have to be ready the next time.”

The Impact failed to find the scoresheet for the first time since losing 2-0 to Toronto FC on April 24. Montreal goal leader Marco Di Vaio (nine goals) was generally held in check, like most of the Impact front men, by the stout Crew defence.

Biello used his first substitution to introduce former Bologna player Daniele Paponi. Paponi almost connected with Di Vaio in the area in the 65th minute, but the striker was deemed offside.

The Impact produced a few opportunities in the second half but never found a rhythm. Warner sent a left-footed strike high over the Crew goal in the 59th minute and in the 71st, Felipe got around Gruenebaum and sent a low cross right through the six-yard box but no one was available to slot it home.

“We were able to still break them down and create chances,” said Biello. “Wenger has a clear opportunity, Gruenebaum makes a great save. It’s at 1-0 and the game’s 1-1 at that point and things change. Second half, we controlled the game in terms of possession and created a couple of opportunities but in the end we were unable to score today and with some mistakes at the beginning, that’s what cost us.”

“Physically, maybe today was not our best day,” added defender Matteo Ferrari. “I don’t know if because of the humidity or two weeks without play. I can tell you that during the week, we worked very hard, we felt good. Today when we were on the field, we were different, always second on the ball. When the other team scores easy like that, it’s not always easy to come back.”

Montreal will hope to regroup when it hosts Houston next Wednesday.

“This is a difficult league, especially on the road,” said Biello. “Not one game is going to be easy and even though we’re in first, we have to battle and fight for every point. I think tonight, we were a little bit second in those battles.

“For us, it’s about getting back to the winning ways and doing what has brought us success up until now and that’s being strong mentally and being prepared all the time to play 90-minute games.”

Crew draft pick Beckie injured
Regina, Sask. native Drew Beckie, the Crew’s second-round draft pick (28th overall) in the MLS SuperDraft, has been on the sidelines with a left adductor injury in recent weeks. Beckie, 22, has yet to make an appearance with the senior team but did earn two starts on the backline for the Crew reserves, most recently in Toronto on May 18. He recently suffered the injury and missed matches against Houston on June 1 and Philadelphia on June 5.