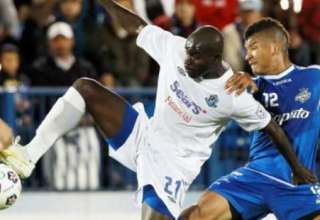 Saputo Stadium does not have an out-of-town scoreboard so the Montreal Impact had no way of knowing that the team it’s chasing for the sixth and final playoff spot in the NASL, the NSC Minnesota Stars, had managed a tie in its game tonight against Tampa Bay.

Undistracted from the task at hand in tonight’s match against the visiting FC Edmonton, getting the three points needed to close the gap between them and Minny, the Impact came through in the clutch with a 2-0 win and has almost climbed out of the hole that it has dug for itself with its dismal play in the first half of the season. Montreal is now just a single point behind Minnesota with each team having a game left on the schedule. Montreal owns the tiebreaker between the two teams.

The Eddies now are assured that they will have to go on the road for their opening-round playoff match.

The Montrealers got to work from the get-go. Leaving with very little space between their defenders and midfielders, Montreal spent the opening 45 minutes launching one attack after another on the Edmonton goal, taking eight shots while allowing the Eddies only one, which did not come until the 44th minute.

Repeatedly getting the ball to the offensively minded Miguel Montano and Sinisa Ubiparipovic, Montreal controlled the play, dominated possession time and came close to taking the lead 10 minutes in when midfielder Amir Lowery’s pass found Montano, who bounced it off the left upright past Edmonton keeper David Monsalve, making his first start of the season.

Two minutes later the Impact hit pay dirt. Ubiparipovic got the ball to Ryan Pore, who rolled it into the twine to the left of the Eddies’ keeper for his third goal since joining the team at midseason.

Each side was assessed four fouls, with referee Justin Tasev cautioning both Montano and defender Philippe Billy in the opening frame. Neither was a popular decision with the 12,433 fans but the crowd’s ire was not raised until Tasen decided that an Edmonton tackle inside the penalty area was within the rules.

Coach Nick De Santis shared the crowd’s opinion and let the fourth official know it in some detail. He left his designated area to do so and was directed back within the dotted line surrounding his player bench.

The second half was virtually a rerun of the first with Montreal once again taking charge of the play, directing seven shots goalward and doubling their lead before things came to an end with the Impact only a point behind Minnesota who tied their match this evening.

Once again the referee distinguished himself by his inaction and raised the ire of the crowd, declining to take action when Montano was tackled with more than what the crowd saw as necessary enthusiasm in the 60th minute by an Edmonton opponent, but seeing fit to warn the Impact forward for his reaction to the contact.

“The only thing I can say is that I’m disgusted,” He said. “In the end, if you don’t have the balls to make the calls, you shouldn’t be refereeing.”

The Impact offence showed the cohesion and skills that have allowed it to come away with 14 of the last 21 possible points in the seven games leading up to tonight’s set-to. A 73rd-minute three way play that saw Ubiparipovic find Pore, who then got it to Ian Westlake with the English midfielder’s shot coming from eight meters out almost doubled the Impact lead. So did a shot from Eddy Sebrango in the 77th minute. Two minutes after the veteran striker came into the game he had unleashed a powerful shot that beat Monsalve but rocketed off the left-hand upright.

A minute later, Pore had his second of the night, this one also coming on a Montano pass.

“You don’t come to the stadium thanking you’re going to score two goals,” he said after the game. “But Miguel picked me up twice tonight and I was able to put two home.”

Keeper Evan Bush, who authored his eighth clean sheet of the year, gave credit to the men immediately in front of him.

He turned his attention to the last remaining regular season game against the Atlanta Silverbacks next Saturday.

“I think the movement and speed that Miguel has caused a lot of problems for their defence. Ryan Pore also did an excellent job, scoring two goals. The team as a whole did well. Edmonton’s a good team but we managed our game well and created chances for ourselves we were disciplined and we earned the victory.”

Looking forward to the last game of the season in Atlanta, he cautioned, “Trust me, it ain’t going to be easy. Atlanta tied Fort Lauderdale tonight and we know how difficult things can be away from home but I do really believe in the team that’s there. They’ve shown it in the past couple months and are one of the three best teams in the league at this moment and I think they’re going to go into Atlanta with the right mindset.

Fort Lauderdale’s failure to get a point was painful for FC Edmonton fans; had the Eddies been able to get three points, it would have allowed the Alberta side to leapfrog the Strikers into fourth spot and still have a shot at a home playoff date.

• Montreal was without their captain Nevio Pizzolitto and fellow defender Simon Gatti, both of whom sat out due to an accumulation of yellow cards.

•Incoming head coach Jesse Marsch is on a ten-day European scouting expedition as the Impact prepares for next year’s MLS ascension.

•The Montreal Impact played to a full house of 13, 034 only once this season. In 2010 they sold out Saputo Stadium a half-dozen times.