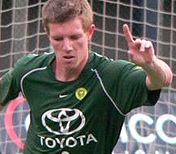 While it has a long and hallowed tradition is show business, “break a leg” is probably not the best way to wish Cameron Knowles good fortune on the pitch. Presently in Montreal on tryout with the Impact, the 28-year-old New Zealand native is attempting to come back from not the first, but the second broken leg of his career.

As a youngster and member of the Kiwi U17 team he cracked his fibula but was back playing in a couple months. But the most recent fracture, suffered ironically enough in August, 2009, at Saputo Stadium against the Impact while the 6-foot-3 defender was a pivotal element of the Portland Timbers defensive corps, was a far more challenging injury.

“I spent a week in hospital in Montreal,” recalled Knowles in a Saturday afternoon telephone conversation. “But when I got back to Portland there were complications with infections. I had to have six more operations. I had my last surgery about a year ago, at the end of July.”

While a perusal of his Facebook page would give one the impression that the sidelined defender spent the bulk of the past couple years in Portland cheering on the Timbers, exhorting fans to take in the local women’s team’s games and searching Oregon for meat pies that compare to the ones he grew up on, it wasn’t all fun and games.

By August of last year he was up to taking part in a charity golf tournament. In September he completed a fundraising walk for autism but his rehab really began in earnest as 2010 gave way to 2011 with Knowles eventually spending 12 weeks in Arizona receiving treatment.

“I went down in late January for six weeks and later on I went back and forth for a while, two weeks on and two weeks off. It was tremendous for my recovery.”

There was good news waiting when he returned from his last trip.

“When I got back to Portland I learned that Montreal were looking for a player in my position and I was at a point where I wanted to train so it was something that just worked out,” he said.

Acknowledging that he is enjoying this stay in Montreal a lot more than his last one, Knowles has had several workouts with the team and pronounces his right leg finally fit for action. He likes what he has seen of his prospective new teammates, saying, “They’re a good team, with a lot of talent. They’ve gone through a bit of a rough spell recently but they played a strong game on Wednesday and I think they’ve turned the corner.”

While he hopes that things turn out well for him here in Montreal Knowles has other options open to him should the Impact decide to take a pass.

“There’s interest from three or four different teams at the moment so if something doesn’t work out here, I’ll try to make the next step and go to the next club and maybe I can help them out. I still think I’ve got a lot to offer.”

IN OTHER NEWS – Saturday, the Impact announced the return of yet another former player to Montreal colours. Subject to clearing MLS waivers, goalkeeper Greg Sutton, named the USLGoalkeeper of the Year four years running during his last tenure in Montreal, will be on loan from the New York Red Bulls for the remainder of the season. Sutton’s tenure with the Impact also saw him establish he existing club records for shutouts, wins, games played and minutes played but he returns in a backup role.

“We expect him to come in and help the team,” said coach, Nick De Santis, after Sunday’s game against the Atlanta Silverbacks. “Greg understands. We were very clear with him. Right now Evan Bush has been a bright light on our team. He’s made saves at the right moments to keep the team in.’

With Bill Gaudette on the sidelines for the foreseeable future things thin out awful fast in the goalkeeping department for the Impact.

“And we have to put ourselves in a position that — knock on wood — anything happens to Bush and Gaudette is still out for five to six weeks, we have to make sure we have a backup we feel comfortable putting in the game.”