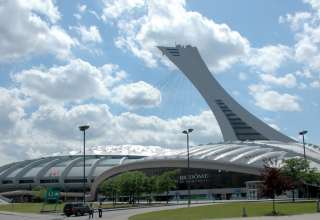 In a pre-game press conference Sunday afternoon, Impact President Joey Saputo and Richard Legendre, Executive VP of the Impact and Saputo Stadium, announced modifications to both the schedule of activity and the design parameters of the upcoming expansion to the team’s home field.

Disappointed in the offers received for the initial tendering of contracts for the project, Saputo told the media that in order to respect the $23-million budget, the construction will begin in September, rather than in July as announced earlier, and that the refurbished stadium would not be ready in time for opening day of the Impact’s first MLS season.

“We were not satisfied with the initial tenders we received and we are not going to exceed our budgets. The project will have some slight modifications and the expansion will be completed in the summer rather than the spring of 2012,” said Saputo.

“We’re going to ask for new bids on a project with certain modified technical requirements for the infrastructure. We are going to modify the plans for the areas under the stands,” said Legendre. “Nothing will change as far as the fans’ enjoyment of the games. There will still be the same number of seats, 23,341, and the roof will still cover 7,000 of them. What we’re changing is the engineering and infrastructure. For instance, we have learned that there are existing seating systems that can be used that will allow us to work within our budgets. We’ve done a lot of work in the past few weeks with all the people involved to find a way to do things so that we can get the same final product but not the costs that our first tenders generated.”

The delay in beginning and subsequently completing the work means that the Impact’s first home game (and perhaps several others in the first part of next season) will be presented in neighbouring Olympic Stadium, where the team has attracted crowds of over 50,000 fans for the CONCACAF Champions League.

Asked how many games would be played in the Olympic Stadium, Legendre couldn’t give an exact number since “We don’t know what the MLS schedule will be or even how many games are on it but we’re talking about a few games, not half a season.”

Saputo picked up where his executive VP left off saying, “If we can foresee the construction ending in June, there will already be about 10 MLS games played. If we can play four of them at home and six on the road, we’re talking about four games at Olympic Stadium.”

“We’ve been in contact, not only with the Olympic Stadium but with the MLS as well. They like the idea of having a home opener at Olympic Stadium,” he continued. “Are we going to be part of what they call First Kick, which is the last Thursday in March? We don’t know yet but we’d definitely be open to doing something of that nature where it would be televised not only across Canada but across the United States as well.”

“What I like about this whole process” Saputo concluded, “is that the MLS is up to speed with it and they like the idea.”