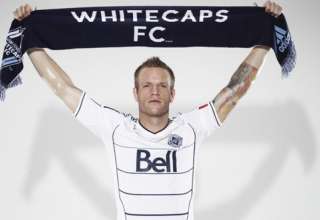 Nick Lewis is looking forward to a few days off.

The last week has been an emotional rollercoaster for Lewis, his fellow filmmaker Ranko Tutulugdzija and Vancouver Whitecaps’ defender Jay DeMerit.

With just days to spare, they learned that enough backers had been brought aboard to fund Rise and Shine: The Jay Demerit sStory, the documentary made by Lewis and Tutulugdzija about the current Whitecap’s journey from the lowest divisions of English semipro football to the Premiership — and a place with the U.S. national team at the 2010 World Cup.

Tutulugdzija and Lewis had urged fans to back the film through Kickstarter, a site where filmmakers and other artists can post their proposed projects. Potential “backers” sift through projects and can support the ones that they choose. To prove to the backers that they weren’t simply giving to charity, the filmmakers and DeMerit made merchandise available in exchange for support — from DVDs of the film, custom T-shirts designed by DeMerit to autographed boots to the chance to train with the big man in defence for a day in Vancouver.

And the unique marketing plan worked — even though things didn’t look good seven days ago.

With a week left to go before this weekend’s deadline, it looked as if they’d fall short of their goal, to raise US$215,000 in order to finish the film and use the funds to be able to secure the rights to footage from the Premier League, English Championship and the U.S. Soccer Federation.

But, as of Sunday, a surge of backers had bumped the money raised to more than US$220,000.

“It’s incredible, what happened,’ says Lewis. “I don’t think we understand fully what happened. The last four or five days kind of exploded. People kept spreading the word. We were so stressed out. We put so much time and effort into it.”

And what’s next for the trio? There is no major distributor for the film, so efforts will continue on that front. If not, the group will self-distribute and try to get it into as many festivals and cinemas — the type that loves to support indie films — as it can.

“We’ll get back to finishing Jay’s story off in the way it should be done. We can add the additional footage and fine-tune the edits, and get the film to a wider audience,” said Lewis.

And Lewis knows he has a lot of DVDs, shirts and other merch to get out to the backers, too. But, after taking the fundraising drive for this film to the streets, and getting a massive response from thousands of soccer fans, sending out those packages will be a labour of love.

“This is now a film that everyone who supported it is now a part of, said Lewis.

DeMerit, who is sidelined with a groin problem that has nagged him all season long, composed a message to those who backed the project and posted it on the Kicktarter site.

“So I’m sitting there on the sideline bench, no one is around. I’m watching the Whitecap guys training in front of me and I’m bummed. My injury isn’t healing and I’m frustrated that I can’t be out there. I reach into my jacket pocket and pull out my phone… I see a text from Ranko and it says three words.  We. Did. It.  I went onto the Twitter feed and saw all of the messages of joy, relief, enthusiasm and congratulations. I believe grown men should cry, and I started to… I couldn’t believe that an amazing group of people, most of whom i’ve never met, could really pull this off. I thought about all of the e-mails that Nick and Ranko started, and responded to, to keep this thing going. Thousands of them. I thought about the individuals who stopped what they were doing on any certain day, to spread the word of this story because they believed that ‘this story should be told.’ Relentless effort from thousands of people was the only way this was going to happen. And that’s the best thing, these things can’t happen unless we MAKE them happen. A fearless group of people showed once again that with hard work, dedication, and a belief, great things can be achieved. This is hopefully just the beginning and you all deserve to be in the credits. This was, and is a complete TEAM effort. And Im so proud and humbled to be a part of this team…. THANK YOU ALL.”

To see the Rise and Shine trailer, click HERE and scroll to the bottom!