August 15, 2022
9 New Articles
Home NASL & USL FC Edmonton It “could have been 9-6”: Eddies win high-scoring affair, but Smits named man of the match 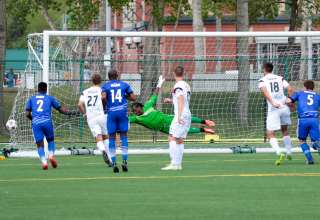 It’s not often when there are six goals in a game — and the winning team scores four of them — that a goalkeeper is named the man of the match.

But that was the case Sunday, as FC Edmonton wrapped up the home portion of the NASL spring season with a 4-2 win over the Atlanta Silverbacks.

John Smits, who got his first ever career NASL win over the Silverbacks, made his first start of the season and made a series of saves on point-blank chances.

“A lot of credit has to go to John Smits,” coach Colin Miller said after the game. “The score today could have been 9-6.”

Smits won the Golden Glove award last season for having the top goals-against average in the league in 2014; but he had been reduced the back-up role behind Matt VanOekel in 2015. But Matt VanOekel was unavailable today due to injury and Smits got the chance to go into goal — and try to shore up a defence that had given up a league-worst 15 goals over their first six games of the season.

Add to that, the need to recover after Wednesday’s heartbreaking 96th-minute Amway Canadian Championship elimination at the hands of the Vancouver Whitecaps.

The Eddies have given up four goals this season in the first 90 seconds of games; and they tried their darndest to do it again, but Smits made a fantastic double save to keep the Silverbacks at bay. Off a free kick, Atlanta defender Simon Mensing rose and directed a header just inside the post. Smits dove to palm it away, then stopped Rauwshan MacKenzie’s attempt to put away the rebound.

“I was caught in two minds at first,” said Smits. “My first instinct was to come out an try to punch out the ball but, then, I thought it would be a shame if I missed it, so I decided to trust my reactions.”

Before the 20-minute mark, Silverbacks striker Matt Horth was sent in on a clear breakaway; Smits charged off his line to stop the chance — and didn’t allow a rebound.

“You have to play every game like it’s your last,” said Smits — who noted he played more minutes Sunday than in the rest of the season and preseason combined.

Smits’ early saves loomed even larger when the Eddies were able to take the lead. Just before half time, Lance Laing ripped a free kick inside the post, choosing to go with power. Atlanta keeper Stewart Ceus had no chance.

Now, with the lead, the Eddies came out in the second half looking to put the game away — and send home FCE alumni Kyle Porter and Dominic Oppong, who both started for the Silverbacks, back to Atlanta unhappy.

Laing, as he has done so often this year, kickstarted another chance that led to a goal. His deep, far-post cross was headed across goal by Tomi Ameobi and into the path of Ritchie Jones, who nodded the ball in.

Ameobi had to leave the game after a nasty challenge, but the resulting free kick led to FCE’s third goal, as Daryl Fordyce’s near-post effort sneaked underneath Ceus, who had looked to have made the dive in time, but couldn’t keep the ball out.

(Additional note: After the game, Ameobi had a walking boot on and was on crutches as he left Clarke Field. X-Rays are expected tomorrow).

But, at 3-0, the game wasn’t over. Sub Jaime Chavez got a goal back for the Silverbacks when he out-leaped FCE centre back Albert Watson for a far-post cross.

Smits then was called in to make two point-blank stops on Atlanta striker Shaka Bangura — on one of the efforts, he got just enough of the shot to tip it off the bar.

FCE defender Kareem Moses, who came into the game early in the first half after fullback Eddie Edward left with an injury, put the Eddies up 4-1. Laing’s cross skipped once in the area before a crouching Moses headed it into the goal.

But, the game wasn’t done; a ball headed across goal by Atlanta’s Christoper Christian was turned into his own goal by Fordyce. The generous NASL official scorers gave the goal to Christian.

Despite the 4-2 result, you look back at the Horth chance, the two Bangura chances, the double-save to start the game — and you see an Eddies team that still needs to address defensive issues. They lead the league with 15 goals for (after seven games) and 17 against.

And with Cup and league games crowding the Eddies schedule over the past few weeks, Miller said fatigue has to be a factor in some of the defensive mistakes the team has made.

Atlanta coach Gary Smith, whose team came into the game boasting the league’s best defensive record, rued the series of missed chances early in the game.

“You have to take advantage of your positive spells in the game. We didn’t do that.”

The Eddies now play their next three on the road, and won’t play again at Clarke Field until they host Atlanta on July 26. Their next “home” game will go July 5 — in Fort McMurray. The long absence is because Clarke Field is needed as the main practice facility for the Women’s World Cup, and FIFA is taking over the venue next weekend.

FIND PLASTIC PITCHAPPLE and ANDROID DEVICES. CHECK OUT THE TIMED FREE PREVIEW! YOU CAN LOOK AT ANY OF OUR FIVE ISSUES BEFORE YOU DECIDE TO SUBSCRIBE!