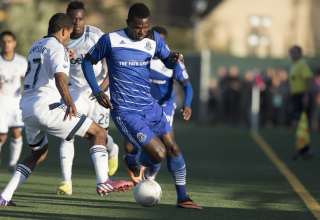 THIS ARTICLE is also slated for the upcoming (sixth) issue of PLASTIC PITCH. But, because of its timeliness, it is being previewed here — and I hope it gives those who haven’t yet seen the magazine the chance to see some of the kind of work we do.

In the first-season finale of The Flash, Dr. Martin Stein — one half of the superhero, Firestorm and a brilliant scientist — tries to explain how chance works to Eddie Thawne, a cop who doesn’t have a scientific mind.

Stein talks about how, despite all of the experiments and hyoptheses, science cannot discard the “wild card of coincidence.”

Is FC Edmonton the wild card of coincidence when it comes to soccer in Canada?

How about this: That the mathematical chance of FC Edmonton losing in two consecutive semifinal stages of the Amway Canadian Championship — on goals scored in the 96th minute of the second legs — is one in 1,137,777.77.

Think of how rare it is for there to be six or more minutes of time added on to a game. Then, think of this: In the semifinals of both the 2014 and 2015 Amway Canadian Championship, the Eddies were eliminated by goals scored in the 96th minute of the second legs.

In 2014, it was a Patrice Bernier penalty kick that gave Montreal a 5-4 aggregate win over the Eddies. In 2015, Matias Laba poked a shot through keeper Matt VanOekel that sent the Whitecaps through 3-2 on aggregate.

So, all things being equal, if a bookie was to give you fair odds two years ago, and you had bet just one dollar on the Eddies losing to Montreal and then Vancouver on 96th-minute second-leg goals, you could have been in line for a windfall of over $1.1 million.

How did we get to this calculation?

First, the odds are 3:1 (or, one in four) that Edmonton would beat the Ottawa Fury two years in a row and qualify for the semifinal.

According to Inpredictable.com(LINK HERE), there is about a 1.5 per cent chance of a close/tied match featuring a game-altering goal after 95 minutes.

But, to even get to that point, you have to figure in the odds of being tied/close after two legs.

So, according to Soccer By the Numbers(LINK HERE), the odds of a tie game in the English Premier League are 24.63 per cent. That’s about one in four. We used that as a baseline for frequency of draws.

To be tied/close in each of the semifinals two years in a row is one in 16 (¼x¼). Multiply that with the Eddies odds of making it to the semis two years in a row, (1/16×1/4). Crunch the numbers, and it gives just a one in 64 chance that the Eddies would be that close in two consecutive semis.

These numbers were verified by Byron Schmuland, a mathematical and stastical sciences professor at the University of Alberta.

But, Schmuland warns that — as we stated over and over — that this is an “all things being equal” scenario.

That’s echoed by Sam Gregory, a soccer analytics expert for Sportsnet who also ran the numbers.

“These are the odds if every event is independent of one and other. So I’d say something like ‘The probability of these two outcomes happening in back to back years by chance are 1/1.2 million,’ otherwise there is some underlying factor, which there almost certainly is.”

The factors? OK, for one, the Eddies would likely be favourites over Ottawa in both of the preliminary round series. But, as the underdogs in the semifinal, the Eddies would be considered longshots to be tied with MLS teams that late into the second leg of their semifinal second legs. So, odds can be stretched either way.

No matter what you think of the odds, it’s a shocking coincidence — and one that should only add to the legend of Cup competition in Canada.