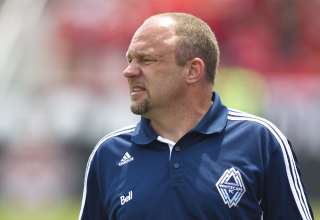 Nick Soolsma’s 54th-minute penalty kick cinched a 1-0 win for Toronto FC over the Vancouver Whitecaps on Wednesday night at BMO Field in a game that served as a dress rehearsal for Saturday’s Nutrilite Canadian Championship final between these same two teams.

At least, the Whitecaps saw it as a dress rehearsal. With several regulars left on the bench, it was clear that Vancouver was already looking ahead to the weekend. Toronto FC, also reduced to a second-choice lineup due to injuries, was happy to take this advantage and pick up a much-needed victory.

“For them, at this moment, the game for Saturday….is more important than the game today,” said TFC head coach Aron Winter. “But for me it’s always important, every game. If you lose like they’ve done this evening, in the coming days you’re together you have to also motivate the players, and it’s not always good for the next game. I don’t worry about it because it’s not my problem.”

Camilo, Eric Hassli, Terry Dunfield, Jonny Leathers and Joe Cannon were all on the bench for the Whitecaps while the likes of Russell Teibert, Peter Vagenas and Omar Salgado got rare starts. Also in the Starting XI were ex-regulars Jay Nolly, Wes Knight, Greg Janicki and Blake Wagner, all of whom were seeing their first action since Tom Soehn took over as Vancouver’s head coach on May 30.

Soehn acknowledged his lineup was made with an eye towards the NCC final, but saw the match as a chance for some of these players to earn more playing time.

“We know it is a Cup to play for, but we believe in our roster and it is a great opportunity for some new guys [to] get on the field and show what they’re made of,” Soehn said.

The tactic, in fact, was almost successful. Vancouver held Toronto scoreless in a sluggish first half that saw both sides manage just two shots, neither of which were on goal. Hassli was brought on at halftime and, after Camilo also came into the game in the 58th minute, it was clear the Whitecaps’ strategy was to use their big guns as reinforcements.

By the time Camilo came into the match, however, the damage had already been done. In the 52nd minute, Janicki fouled Soolsma as the striker was inside the Whitecaps’ box. It was a light foul, but enough for referee Mark Geiger to award the Reds a penalty kick.

One penalty deserves another
Soolsma himself took the shot and while his initial attempt went inside the right post, it was whistled back due to an encroachment call on Joao Plata. The pressure was suddenly doubled on the young Dutch forward, but Soolsma calmly put his second attempt into the left side of goal for the conversion and his first MLS goal.

“The first time I took it and I scored, then I heard the referee say I must take it over and I was thinking ‘which side should I take it?’ ” Soolsma said. “I chose the other side and it went in.”

While the Whitecaps threatened on a couple of occasions in the second half, the Reds left no doubt that they were the better side on this evening. Winter was pleased his team could finally claim a win from a superior performance, unlike in some recent matches.

“It’s a good feeling because for a few games we were better and we could also say we deserved to win those games,” Winter said. “Now, sitting here with a victory, it’s a nice feeling. Especially also for the whole process for the players and for the fans.”

The result snaps a nine-game (0-4-5) winless drought for Toronto and gives the Reds a bit of redemption against their Canadian rivals. The Whitecaps handily beat TFC by a 4-2 margin in the season opener and the two sides played to a 1-1 draw in the first leg of the NCC final on May 18. Vancouver even had a 1-0 edge on May 25 when the two teams first attempted to finish the Voyageurs Cup final, before that match was abandoned after 60 minutes due to lightning and a waterlogged pitch.

Morale boost for Reds
“It’s a boost for morale and it will help us going forward into this next game now,” said midfielder Gianluca Zavarise.

Speaking of Zavarise, he was one of the several second-choice Reds in the lineup due to TFC’s latest run-in with the injury bug. Nana Attakora, Julian de Guzman, Alan Gordon, Jacob Peterson, Maicon Santos, Tony Tchani and Dicoy Williams were all out with various maladies, with de Guzman the only one to even take a place on the bench (he did not enter the game).

“We’re now in a situation where, because of all the injured players, you have to be creative,” Winter said. “You saw with the subs that came in, you have use a lot of younger [players]…..I think we earned those three points.”

In short, TFC’s signing of designated players Torsten Frings and Danny Koevermans couldn’t have come at a better time for the beleaguered roster, though neither man is eligible to play until July 15. The new DPs will obviously relegate a few players to the bench, into a luxury suite as a healthy scratch or even off the roster altogether, but players like Zavarise (making his second consecutive start) are just worried about making their current minutes count.

“I was injured for over a month and a half and I’m just trying to get my legs under me,” Zavarise said. “After 60-70 minutes my legs started cramping up….That’s all I can ask for myself right now is to get my legs back and to slowly build from there.”

As for the Whitecaps, the loss continues their struggles away from Empire Field. Vancouver has yet to record a road win this season, dropping to 0-7-3 after Wednesday’s result. With the biggest match of the season looming on enemy territory on Saturday, the ‘Caps need to figure out their road woes in a hurry.

TFC carries the tiebreaker into Saturday’s final due to Santos’ second half goal in Vancouver on May 18. If Saturday’s result is a scoreless draw, the Reds would three-peat as Canadian champions and advance to the preliminary round of the CONCACAF Champions League, with the opening leg against Nicaragua’s Real Esteli on July 27, the same night as the MLS All-Star Game. The Whitecaps will need to win or score at least two goals in a draw to earn them their first Voyageurs Cup.