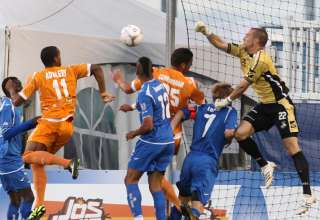 A change is as good as a rest. For the Montreal Impact, that old adage certainly held true as they provided fans with their best effort in some time, coming away from their match with the Puerto Rico Islanders with a scoreless tie in front of a crowd announced at just over 10,000 at Stade Saputo.

A team in full recycle, the Impact had Nick De Santis back on the sidelines, who was a more visible and voluble presence than the recently departed Marc dos Santos.

The former coach, who resigned Tuesday, was recognized for his efforts by the Ultras, who hung a sign reading “Merci MARC” in front of their designated roost in the east end zone.

The third-place Islanders dominated possession time in the opening minutes, their crisp passing, and aggressive defence giving the home team difficulties in the early going. The host team got into gear quickly and held their own for the rest of the evening.

Play went back and forth with Montreal demonstrating an intensity that has been absent in their recent outings. Three shots were directed towards each goal in the opening half, none of which were particularly tough for the keepers to handle.

While the Islanders team approach did not allow for any individuals standing out from the group, Montreal’s midfield had a better time of it than their forwards in the first 45 minutes. Anthony Le Gall, one of only two players to appear in every game so far this season for Montreal, was his side’s most effective player in the first 45, countering and recovering the ball from visiting opponents. He provided the initial passes on most of the Impact’s attempts.

Up front, Mignane Diouf was the only man to take multiple shots, sending a pair towards the goal with Ray Burse stopping them both, with the second posing the greatest threat as Burse made a sliding save to deny the Impact striker.

Montreal keeper, Evan Bush, voted Impact player of the game, was not severely tested and made saves on all three shots that came his way.

The second half followed the pattern set in the opening frame with the home side spreading the play out and regularly challenging the Islanders’ net while the visitors regularly counter-attacked.

In the 52nd minute, Puerto Rico’s top scorer, the diminutive Jonathan Fana, was denied his eighth marker of the year at point-blank range by Bush, whose continuing excellent work in replacement of Bill Gaudette is one of the few bright points in Montreal’s lacklustre 2011 campaign.

As the second half unfolded, Montreal began to take the advantage, playing multiple minutes in the offensive zone and testing Burse repeatedly. The out-of-town keeper held up well, turning away several shots to keep the score sheet pristine as the Impact showed signs of life that fans had hoped would come a lot more regularly in this less than satisfying schedule.

The recently reactivated Eduardo Sebrango, who has not donned a jersey in anger since he hung up his spikes last April, had to settle for vocally supporting and encouraging his peers for the bulk of the match, entering during the 78th minute to a round of applause from fans who have not forgotten the team’s second-best all-time scoring star.

The Islanders’ final chance came in the 86th minute as Puerto Rico’s David Foley twisted and turned his way to the front of the Impact goal before unleashing the most difficult shot that Bush faced on the evening.

Three minutes of extra time were added by the fourth official and the excitement stretched into the final seconds. Sebrango got a shot off that Burse once again got to on the goal line, a play most in attendance thought should have been called by referee Justin Tasen for a foul, who was rewarded with a chorus of boos for not making the popular decision.

“I’m really happy that I got a chance to play again and I just do my best to help the team,” said Sebrango. Asked about the play he made as the final seconds ticked away he agreed with the majority of those in attendance.

“It was a foul,” he declared. “I went to shoot and I couldn’t gain any power. It’s disappointing because we’re at home but I guess we have to accept it.”

Bush, who posted his third clean sheet of the year declared himself satisfied with his night’s work and hoped that the defensive contributions would make a contribution to turning things around for the Impact.

“We’re trying to fix it and at some point we’re going to fix it. It’s our job as a defensive unit to continue getting clean sheets and wait until we start scoring goals.”

De Santis was very pleased with his team’s efforts declaring, “It was a very intense game with a good pace to it. We were really hoping for a win but we are going to grow. We have to play a stronger positional game, work on our speed and make decisions quicker. I’m very pleased for the young guys because they’re going to get more chances.

“I was surprised by Puerto Rico because they played back on their heels last time we played them. Tonight they applied pressure because they felt they were playing a team that was undergoing difficulties. I’m very proud of the guys. They reacted very, very well. It’s a step-by-step process and I’m sure we can work our way out of it. It’s an excellent starting point and that is going to be my message to them.”

Throw-Ins : The Montreal Impact’s junior squads had a much more rewarding weekend than the big club did. The U21 team defeated the visiting York Shooters 3-1 on Saturday while the Academy side handled their Toronto FC counterparts by an identical score.

•Returning head coach Nick De Santis steered the Impact to a 63-20-29 record during his slightly more than four seasons in charge between 2004 and 2008, guiding the team to a league championship and a pair of regular season titles during his first term.

• While it was only announced this morning that the 38-year-old striker was rejoining the team Eduardo Sebrango, second only to Mauro Biello with 45 goals and 100 points on the team’s all-time scoring list, began practicing with the Impact a week ago.

• Islanders forward Jonathan Fana ,the shortest and lightest man in the NASL at fife-foot-five and 132lbs. , came into tonight’s game second only to Carolina’s Etienne Barbara when it comes to both goals scored multiple-goal games so far this season.