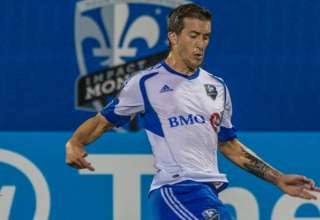 Montreal Impact head coach Marco Schallibaum decided to leave five veteran starters back home rather than risk playing them on a synthetic surface. So, he let the younger players on the roster carry the baton for the team’s CONCACAF Champions League game against CD Heredia in Guatemala City. The kids came within a couple minutes of a result, ultimately allowing the match’s only goal in the 88th minute, a respectable outing since Montreal played the second half a man down.

Jeb Brovsky was the only familiar face on the back line, playing alongside homegrown Wandrille Lefevre and Maxim Tissot while Adrian Lopez made his first appearance for the Impact, listed under the nom de pitch, Piscu.

Heredia, home side despite playing some 250 km from its stadium, took control of the game after an opening quarter-hour that saw both teams start tentatively with each benefiting from some good fortune in the early going

In the 19th, Lefevre was called for tripping up CD Heredia froward, Enrique Miranda, in the box, sending Charles Cordoba to the spot. His rising drive was bounced back into play by the horizontal bar as Evan Bush, anticipating a low shot, dove towards the corner of his goal.

Bush made a key save in the 22nd, stretching out his right leg to meet a shot that midfielder David Espinoza glanced off Brovsky.

Tight marking and determination led to the home side taking control of the game and launching several attacks on the Montreal goal while the Impact was unable to string together more than a couple of touches before giving up the ball to its hosts, who had three of five attempts on target while the Impact was unable to direct a single shot towards the goal defended by Jose Calderon.

The second half saw CD Heredia control the pace and the flow, frequently taking the play to the Impact third of the pitch but unable to put the ball into the mesh despite holding the numerical advantage. Montreal, unable to mount coherent counterattacks on the rare occasions it gained possession, defended by long clearances or sending the ball out of bounds.

The Impact finally got more than two consecutive touches in the 58th minute which resulted in its only shot of the night, a weak Daniele Paponi effort that was easily handled.

Tissot and Heredia midfielder Osmar Lopez went up for a cross in front of the Impact goal in the 66th and both stayed on the ground after going head-to-head. Lopez was carried off but the Montreal defender declared he was fit to continue and tried to turn down the lift to the sideline until informed that failure to climb onto the stretcher would mean a yellow card.

A second brief period of extended cohesion in the 73rd yielded the Impact’s best chance of the night. After captain Davy Arnaud did the heavy lifting, getting the ball up the pitch and passing it to Paponi, the Italian forward found Smith in front of the opposing goal but the rookie’s shot rattled off the right hand vertical.

The game settled into a rhythm of Heredia attacking the Montreal goal area but being inelegantly but usually effectively countered by its outnumbered, younger opponents — who yielded numerous throw-ins and corner kicks after sending the ball into touch.

It was a strategy that seemed to be paying off for Schallibaum’s men although Bush was pressed into service in the 83rd, coming out to challenge an incoming Cordoba and beating the striker to the ball to keep the game a scoreless tie, if only for another few minutes.

Two minutes before the final whistle one of the many set pieces paid off for CD Heredia. A short pass on the reset was centred by Espinoza. Less precise than intended, the ball made it to the Montreal ‘keeper, but Bush was unable to corral or control it. The ball rebounded to Cordoba’s feet, his fifth shot of the game guaranteeing a CD Heredia victory, the three points putting it into a tie with Montreal for first place in its CONCACAF Champions League group while the San Jose Earthquakes have yet to register a result.

Montreal’s next game is a MLS match-up against the Houston Dynamo at Saputo Stadium on Saturday. Their respective reserve teams do battle on Sunday morning.