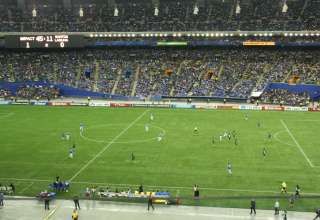 Olympic stadium was packed for CONCACAF Champions League in '09.

Things are going well with the Montreal Impact although there is still some tweaking to be done to enhance fans’ enjoyment of the games at the cavernous Olympic Stadium, at least as far as Richard Legendre is concerned.

The team’s executive vice-president dropped by practice Thursday morning and spoke about the team’s temporary home as well as preparations for the unveiling of the enlarged Saputo Stadium, scheduled for mid-June.

Asked about the sales of tickets for Saturday’s game against Portland, he said that they were going well, standing at a little over half the capacity of the lower bowl as he spoke.

“When we get close to the 20,000 capacity of Saputo Stadium, above the average capacity of the league, we feel pretty satisfied,” he said.

Legendre declined to share any numbers for the Wednesday Amway Canadian Championship match against Toronto FC.

“It’s too early. We’re releasing ticket sales numbers on a game by game basis. We’ve got 17,000 sold for Portland. It’s a bit lower than that right now for the Canadian Championship, the Amway. But that’s why we’re doing promotions. We have inventory at OS and we want the people to come in and get a taste of the new MLS product. It’s important for us.”

To that end, a family of four, two adults and two children, can get into Saturday’s tilt for half the regular rate.

“Families have always been behind us in the past and we want to be able to let them take advantage of our playing at Olympic Stadium. We have, even in the smaller format, 34,000 seats,” Legendre said. “We didn’t run promotions for the first two games. We went on a regular structure. We figured this was the right moment to bring this one in. We’ll see how it works.”

Asked how many fans the team had to draw to reach a break-even point at their first half dozen home games, Legendre said that while the Impact organization had certain hopes and targets, they were not established on a game-by-game basis.

“To be honest we didn’t establish specific attendance goals for each game. We felt that over six games in the Olympic Stadium, five of them MLS games, if we could average 30,000 we’d be doing OK. We know the games are different. Obviously the opening game was a big event. It was historic and we know that Los Angeles and New York are going to draw well. Portland’s a team that’s not as well known. We’re going to assess things after the six games at Olympic Stadium.

“We’re also in Saputo Stadium mode,” he continued. “With a new series of season tickets being made available for the 12 games that will be held at Saputo Stadium. We feel that there will be great interest in this from the fans. Another nice package, reasonably priced given the reduced number of games. Season tickets for between 15 and 30 dollars each.”

The Impact has been conducting telephone follow-ups with fans to inquire about their initial MLS exposures.

“When you get a crowd of 58,000, that’s a lot of prospects,” said Legendre. “We wanted to see if they were happy, if they were well-served. The feedback is mainly about what they see on the field and the feedback was good on that

“What we’ve heard a lot is that the calibre is different,” he continued. “That’s what we’ve been saying for a year — MLS is major-league soccer. From the very beginning, even the games we saw on TV, reaction from the fans has been, ‘Whoa, that’s not how it used to be. That’s much higher calibre.’ We heard that quite a bit. We also heard from first time fans who said, ‘Yes, we liked the historical event (home opener) and we would like to go back.’”

There have been criticisms about other aspects of soccer at the Big O. Congestion is the major complaint, be it for access to both the facility itself or to its concession stands.

Legendre admitted it was an area of concern, mentioning that it has been some time since multiple sports events have been staged in that venue.

“Where we have to improve is in getting people here and people going out at half time to get food. That was the big problem the first game, especially with 58,000 people,” he explained. “The second game there were fewer people so they were easier to serve but even with that when you have 5,000 people going to the concession or the boutique in 15 minutes, it’s difficult.”

“The challenge here, like it is in any soccer stadium, is more about half-time.” Legendre offered. “We do not have much time –we have 15 minutes to serve the maximum number of people in that time. Soccer is the type of sport where you do not see a lot of people leave their seat during the game.

“We have six games here and we want to continue to improve. The partners from the Olympic Park and the concessions also want to improve and serve the population well,“ he said before answering questions about the under-reconstruction Saputo Stadium.

“Things are moving quickly and they have to move quickly, right to the very end. More than 50 per cent has been completed. The stands are rising rapidly but it’s going to be a mad race to the 16th of June,” he said before facing the inevitable recurring “what if?”

“Sometimes I feel like I’m a pre-recorded message. I said it four and five months ago — we’ve known since the beginning that it was going to be tight. We couldn’t start the work after the season and go about things at a relaxed pace. It’s advancing well. We have eight weeks before the opening game and it is going to be a rush all the way to the end. We don’t have any other scenario. We’re working exclusively within the scenario that we’re playing on June 16th.”

Asked how long the players would have to acquaint themselves with their revamped field before facing opposition, Legendre admitted they’d have to get to know each other very quickly.