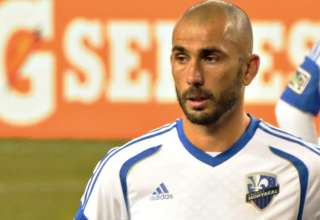 The Houston Dynamo, with a 3-0 win over the visiting Montreal Impact, will play the New York Red Bulls in the Eastern Conference semifinal on Sunday. The Impact players return home having reached the objective they set for themselves at this point last year, but nonetheless ended the 2013 season as somewhat of a disappointment given their early successes.

Head coach Marco Schallibaum rolled the dice and started Nelson Rivas on the back line.

“I’ve seen him for the last two weeks,” said Schallibaum on RDS before the game got underway. “He’s got experience and he may not be 100 per cent, but even at 80 per cent, he’ll help the team.”

Making his first start of the year following knee surgery late in the 2012 season and an extended recovery period that had the Colombian defender the subject of so many Tour de France jokes that the club asked local media to tone it down, the rugged Rivas gave a good accounting of himself but left at he behest of referee Mark Geiger in the 70th minute.

Undertaking the opening half with a lot more focus and cohesion than the team has shown in the past two months, Montreal went on the attack in the first few minutes. Forward Marco Di Vaio was twice caught offside in the first five minutes, usually a good omen for the Impact, and the visiting side held sway for the first quarter-hour, Houston’s only chance in that time span a 14th-minute Ricardo Clark header that keeper Troy Perkins countered.

A minute later the Houston midfielder was at the origin of the game’s first goal. His back-heel allowed forward Will Bruin to exploit the gap between Montreal central defenders and drive the ball into the top right hand corner of the Impact goal.

A poor clearance attempt led to Montreal’s first chance, a Justin Mapp shot that rolled by the right post in the 18th. The veteran midfielder was among the better Impact performers, regularly making things happen on the right side while his counterpart on the left side, Andrea Pisanu, was all but invisible.

Houston got a second goal only 27 minutes in, putting the Impact into a hole it would not be able to dig its way out of in the remaining hour of play. It came on a set play, the penalty kick awarded after Hernan Bernardello upended Boniek Garcia just inside the area.

Garcia went to the spot, doubling the Houston lead with a shot that eluded Perkins and found the bottom left corner.

The Impact went into the break still down by a pair but also still putting out effort, getting a 40th-minute chance off a Mapp centre that Di Vaio headed over Tally Hall’s net and another try by the Italian striker — who potted 40% of his team’s goals this season — on an Andrew Wenger feed but had his lob attempt turned away by the Houston goalkeeper.

Houston laid back in the second half, allowing Montreal their only four shots on frame but still maintaining control of the flow of play.

The teams traded chances with Mapp putting a shot just wide in the 54th and Bruin having his shot pushed away by Perkins in the 58th, the try coming after applying sustained pressure in the Montreal end.

Needing goals, Schallibaum sent Andres Romero in for Pisanu in the 55th and replaced Wenger and Collen Warner with Felipe and Daniele Paponi after slightly more than an hour but the move did not pay dividends.

Rivas, already cautioned in the first half, got another in the 70th minute and left the pitch, leaving his teammates both visibly deflated and a man down for the balance of the match.

The result was sealed in the 72nd minute, with Houston going three goals up on a highlight reel marker by Bruin, his second of the game. The Dynamo forward headed the ball forward, beat defender Matteo Ferrari to it, rounded Jeb Brovsky and sent his right-footed shot into the mesh from the top of the box.

The 24-year-old St. Louis native had a shot at completing his hat trick five minutes later but was denied by a sliding Perkins.

Minutes ticked off towards the inevitable, tempers frayed and a scrum two minutes from the end of regulation play resulted in both Romero and Di Vaio being sent off while Houston defender Corey Ashe earned a caution from Geiger, who elected not to play any added time.

It was stated that Schallibaum would be returning if the team made it into the postseason. But the Impact’s performance in the final weeks of the season — recording a single win in their last half-dozen games, losing three in a row at home and backing into the playoffs as much as a result of other team’s shortcomings as their triumphs — after being comfortably perched atop the MLS Eastern Conference standings might make that statement inoperative.