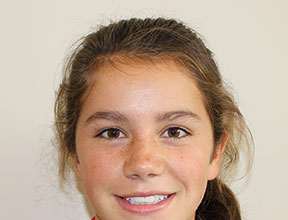 Jessie Fleming
Sure, there’s a sort of euphoria that comes with a Canadian national team winning their first two games of a major tournament by an aggregate score of 19-0. First, there was the 8-0 win over Guatemala. And, on Saturday, an 11-0 thrashing of Trinidad and Tobago. And, so, Canada has clinched a spot in the semifinals of the CONCACAF U-17 Women’s Championship with two blowout triumphs in the group stage. A final group stage match against the United States will be all about group positioning. Only the top two teams make it to the U-17 Women’s World Cup in Costa Rica. And Canada knows it will avoid the U.S. in the semis — so these two nations are the two favourites to get the qualifying spots. But these matches do ask some deeper questions. Not about women’s soccer in Canada, but in CONCACAF as a whole. Today, we watched Canadian forwards go through Trinidadian defenders like they weren’t there. We saw Canadians push and swarm forward with no fear of counterattack. And, this begs the deeper question: What is the state of the women’s game in CONCACAF outside Canada and the United States? It certainly looks like this regional competition will look a lot a women’s hockey tournament — it’s just a question of Canada and the United States running up the score over the field. Sure, on the other side of the bracket there may be countries who can offer more at the U-17 level. But, while Canada coach Bev Priestman said “the girls have grown since the last game” after the win over T&T, the truth is that the level of opposition is so poor, it’s hard to really take anything away from these games other than Canadians spend a lot more of their time focused on women’s soccer than they do in many parts of Central America and the Caribbean. A substitute — Nadya Gill — has two braces in her two brief appearances for Canada. Emily Borgmann had a hat trick Saturday. Marie Mychele Metivier also scored three times. Marie Levasseur also had a brace and Jessie Fleming, controlling things from the middle, also got a goal. The 11-0 margin, CONCACAF confirmed, was the second-largest rout in the history of U-17 Women’s Championship. Days like this are wonderful for the winning team (or nation). But they’re not necesarily good for soccer.
Load More Related Articles
Load More By Steven Sandor
Load More In Uncategorized