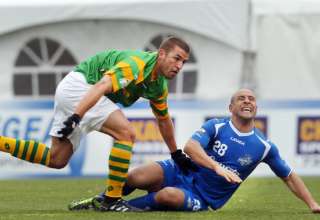 While its game this afternoon against visiting FC Tampa Bay was the third on the Montreal Impact’s 2011 NASL schedule, in assistant coach Mauro Biello’s mind the home opener signalled the true beginning of the team’s season.

“The Impact always plays its first few games on the road, but our season never really gets underway until that first match on our field,” he said at practice yesterday.

The Montreal Impact was hoping to record its first victory of the 2011 campaign over Tampa Bay FC in front of 13,000 fans this afternoon — but inclement weather kept the attendance down as the home team had to settle for a 0-0 draw in front of considerably fewer spectators.
Near-freezing temperatures and winds that regularly gusted beyond 30km/h combined to make for an afternoon during which only the 36 media folk on the press gallery and the Ultras in section 114 — their drums banging, flags flying and vocal cords fraying — seemed to be immune. It was weather more appropriate to November than late April.

After almost giving up a goal in the early going, the Impact took six shots during the scoreless opening half to Tampa Bay’s two, with goaltender Jeff Attinella making three stops while his counterpart in the Montreal net, Bill Gaudette, had only a pair directed his way as his right post made one more stop than he did.

Despite Montreal’s edge in shots, Tampa held the advantage, their ball control and team cohesion superior to what their hosts showed. Tampa Bay hit a post five minutes in and came close once again in the 36th minute of play. Tampa forward Warren Ukah was the only player subject to major discipline, yellow carded for his overenthusiastic tackle of defender Kevin Hatchi on the Impact goal line in the 27th minute of play.

Pressing as the second half began, the Impact paid the price for over exuberant play with Idriss Ech Chergui being shown a yellow in the 48th minute and Amir Lowery undergoing the same treatment 10 minutes later.

Meeting the press after the match head coach Marc Dos Santos found encouragement in not having allowed any goals to the opposition but expressed some sadness that the Impact had been unable to prevail.

“I felt the team was very nervous in the first half. We were afraid of losing and we didn’t want to disappoint our fans. Sometimes you want to win a match so badly that you forget how to do it. We were not that good in the first half even though we created some opportunities for ourselves with the shots by (Luke) Kreamalmayer and Chergui but Attinella made good saves on both of them.”

Asked if the weather was a factor, he concurred. “Normally when Gaudette kicks the ball out it goes all the way to the other goal line. Today they were barely making it to the centre of the field.”

Dos Santos admitted that his players have not yet jelled into a cohesive unit, particularly the forwards, something he sees as a function of having so many new faces on the roster.”When players know each other better they know what kind of balls to play to the other players. Last year remember Ali (Gerba) and Eddie Sebrango last year, it was almost automatic. Now it’s a new team and you need to get to know the players you’re playing with better. You get that in game and it’s only normal that it takes time.”

The Impact’s next game is on Wednesday when it hosts the Vancouver Whitecaps, first of a home-and-home series in the Nutrilite Canadian Championship. The aggregate winner will then face the winner of the other series featuring Toronto FC and FC Edmonton.

THROW-INS
• Both defender Richard Pelletier and Hicham Aaboubou finished serving the suspensions arising from the second leg of last season’s semi-final against Carolina.

• None of the Impact players are signed beyond this season as the team prepares to become the 19th MLS team next spring.

• Renovations to expand Montreal’s seating capacity of from 13,000 to 20,000 are expected to get underway next month. The Quebec government is coming up with the $23 million needed to modify Stade Saputo, which opened in 2008.