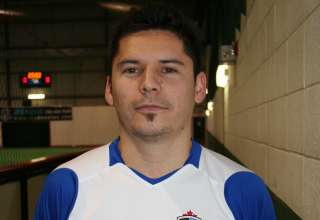 The club is hosting a meet-the-team event at Sports Central Bar and Grill (9221 34 Ave.) Monday at 6 p.m. Edmonton products Shaun Saiko and Chris Lemire, Trinidad and Tobago striker Conrad Smith and coach Harry Sinkgraven will be on hand to meet fans. FC Edmonton’s new all-white road jerseys will be available for sale for the first time at the event; here’s to hoping that the new home blue strip also is at the event.

On Tuesday, Toronto FC coach Aron Winter and Sinkgraven will attend a press conference at Commonwealth Stadium. For the pair, it will be a reunion of sorts. The two took classes together to get their coaching certifications in the Netherlands.

Toronto FC visits Commonwealth on Wednesday at 6 p.m. local time in the first leg of the semifinals, an early kickoff that was set to suit Rogers Sportsnet’s TV schedule.

FC Edmonton, which will play its NASL home games at 3,500-seat Foote Field, launched some initiatives to get as many bums in the seats as it can for Wednesday’s game at cavernous Commonwealth. A drive saw fans who get two tickets to the NCC game for every season ticket purchased. And the team even went on Groupon, making two tickets for the NCC game available for $35 — a face value of $70.50.