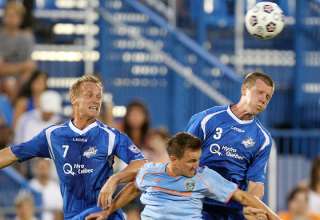 The drama came early in tonight’s game at Saputo Stadium with the action threatening to upstage the Impact’s planned highlight, the halftime unveiling of its new MLS logo — an event it had promoted with glee club styled, flash mobs over the course of the past week.

In the end, the new graphic was well-received but the evening ended on a down note for Montreal, who dropped a 3-1 decision to the third-place NSC Minnesota Stars, a game in which it did not challenge seriously for victory.

Two minutes after the ball was put into play the Ultras walked out carrying their flags and drums with them. Embroiled in a war of words with Nick De Santis, many written on banners requesting his resignation, and irate over disparaging comments the head coach and technical director made about them on the radio earlier this week, Saputo Stadium was a much quieter place in their absence.

“Montreal is just a tremendous atmosphere, and it’s as hostile a crowd as you’ll find in this league,” Minnesota coach Manny Lagos said in his pregame comments on Thursday. “It’s important for us not to let the crowd intimidate us or cause us to lose focus, so the last thing we want to do is be forced to play from behind.”

Things went according to Lagos’s game plan with his team getting out to a lead thanks to midfielder Neil Hlavaty. Minnesota’s designated free kicker and author of the only goal the last time the teams met buried his penalty kick, one made possible by a David Testo foul.

Montreal drew even five minutes later when Anthony Le Gall’s pass found Ian Westlake. With Minny keeper Joe Warren, who leads the league in clean sheets with six, out of position the Impact midfielder only needed a soft roller to find the mesh.

Both teams had other chances, the best coming on a free kick taken by Simone Bracalello that forced Impact goaltender Evan Bush to dive to his right, making the save just inside his post.

The lights went out at halftime as the seconds ticked off until the Impact’s new MLS logo was revealed. The crest features the black and blue that have been team colours since inception and also includes the fleur de lys, four stars and the word “Montreal” written on the diagonal with bars of black and blue completing the bottom of the shield.

The new design found wide favour with the crowd, who applauded it loudly, their number including the returned Ultras. Their protest made, they resumed their places in the north end zone and greeted the new trademark not only cheering as lustily as the rest of the crowd of 12,397 but banging their drums and flying their banners.

Second half action began with the Ultras back in their appointed spot and the ageless Eddy Sebrango subbing in for Kremalmeyer. Ali Gerba directed a 59th minute pass from Ryan Pore into the Minnesota goal but it was turned back when the referee declared the Montreal striker was offside.

Two minutes later Pore left the game and another new Montreal player made his debut.

Former New York Red Bulls midfielder, Sinisa Ubiparipovic, whose name, like that of the Max Gail character in Barney Miller, is pronounced exactly the way it is written, is the second recent addition from the ranks of the Red Bulls, subbed in and played the rest of the game.

Minny went ahead for good in the 74th minute on a brilliant solo effort by Bracalello, who rotated past Cameron Knowles and drove the ball home. Another try 10 minutes later was stymied by the combined efforts of goalkeeper Evan Bush and midfielder Le Gall, who co-operatively kept the ball from the netting.

In the five minutes of extra time added by referee Mathieu Bourdeau, who was made aware on several occasions that the crowd was in disagreement with his decisions, Minnesota nailed down the victory as Bracalello got his second of the night.

Captain Nevio Pizzolitto spoke along similar lines, agreeing that the Impact’s energy level was not what it should be and going on to mention the referee’s role in the outcome.

“There were two penalties the referee didn’t call and then they got their second goal,” he said before refusing to comment further on the work of the on-field official.

It’s really a big disappointment, particularly after the game we played last week,” declared Anthony Le Gall, who assisted on his team’s only goal of the night. “It’s frustrating. Every time we get a chance to move forward, towards a playoff berth, we put a stick through our spokes. We’re not going to give up though. We’re going to keep going but it is very frustrating.”

Head coach De Santis was succinct in his evaluation.

“There were too many guys who didn’t show up tonight,” he offered. “A couple players came to play and others were having a hard time finding rhythm. Overall they won most of the challenges, the 50-50 balls. We did have a couple chances but overall it wasn’t a very good performance”

He refused to discuss the officiating of tonight’s game, saying “I don’t want to go there. You analyze it and judge for yourselves.”

“We have three games left in this home stand and we have to accumulate points and good performances” he said.

Asked for his reaction to the Ultras’ walkout, he also chose to pass on offering his thoughts to the press, declaring, “Please don’t waste my time with this. If you guys want to follow that, follow that. I have no time to waste. I have bigger worries.”

The Impact get back to work on Wednesday when the visitors will be fourth-place FC Tampa Bay.

THROW-INS: Tonight’s match was the first the league-controlled NSC Minnesota Stars, who have yet to overcome allowing the first goal, had played at Saputo Stadium.

• Montreal had to do without midfielders Hassoun Camara and Amir Lowery, who sat out suspensions for receiving their fifth cautions of the season against Puerto Rico last week.